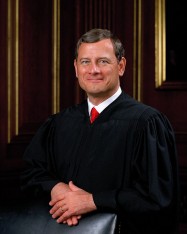 Chief Justice John Roberts attended the Law Day banquet at New England Law|Boston on Wednesday evening where he spoke on a variety of issues, including his longstanding concern about partisan politics damaging the public perception of the Supreme Court.

Chief Justice Roberts has faced a lot criticism lately, especially from Republican presidential candidates like Donald Trump and Ted Cruz.  But Roberts told the crowd of about 1,000, that he is not bothered by criticism of the court, but he concerned about people not having a really good understanding of what the court does compared to the other branches of government.

Roberts also expressed concerned with how the Senate nomination process has changed over the past 20-30 years, noting how Justice Ruth Bader Ginsberg and Justice Antonin Scalia were essentially nominated unanimously, whereas more recent nominations barely pass on a strictly partisan vote.

He blamed the divisive confirmation hearings for the public viewing many of the justices as either Republicans or Democrats and suggested the hearings were being used for something other than determining qualifications of the nominee.

On a lighter note, Roberts also discussed the strong bond between the nine justices, even in spite of their sometimes contentious disagreements during deliberations.  He also told the audience that he believes the incredibly rapid evolution of technology will pose the biggest challenges to the Court going forward.