Big Surprise, Marco Rubio is Against Abortion for Zika Patients 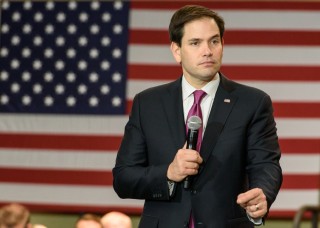 Rubio is running for reelection in Florida, which has been making headlines lately due to cases of the Zika virus popping up in Miami. Rubio had fought hard in the Senate to take measures to protect people from the virus, which causes birth defects when pregnant women are infected. He was the first GOP Senator to co-sponsor proposed $1.9 billion legislation to fight the virus, which eventually failed. Rubio told Politico that he voted in favor of each anti-Zika bill he had a change to support.

But lest people get the impression that he cares too much about people suffering the effects of Zika, Rubio made it crystal clear that he’s only concerned with keeping people from getting the disease. If a pregnant woman happens to catch the virus, well, he’d rather she and her baby just live with it once it’s born. “I understand a lot of people disagree with my view – but I believe that all human life is worthy of protection of our laws. And when you present it in the context of Zika or any prenatal condition, it’s a difficult question and a hard one,” he said. “But if I’m going to err, I’m going to err on the side of life.”

“I’m not pretending to you that that’s an easy question,” Rubio told Politico, acknowledging the difficulties presented by the effects of microcephaly, a birth defect caused by Zika. “But I’m prolife. And I’m strongly prolife. I believe all human life should be protected by our law, irrespective of the circumstances or condition of that life.”

Rubio’s stance on this should come as a surprise to roughly zero people. He has always been a hardliner on abortion, stating in the past that he was against the practice, even in cases of rape or incest. And while I disagree with him on this particular issue, I’m not knocking him for having that belief. Just like Rubio isn’t pretending that it’s a simple issue, I’m not going to do that either. I believe that reasonable people can disagree when it comes to abortion. What I don’t understand is why Rubio feels the need to make a statement like this that 1) doesn’t add anything to his record on the issue, 2) can significantly offend his constituents who are dealing with Zika, and 3) has little to do with his actual job.

I can understand if someone running for President discusses abortion, since they may get to nominate Supreme Court justices who could actually effect how abortion is practiced across the country. A candidate for Governor can also effect abortion regulation within their state, so it would also make sense if they chose to discuss it. But as a Senator seeking reelection, there’s no need for him to talk about it. Sure, if the Senate decides to ever make a decision regarding a Supreme Court nominee, members’ views on key issues like this could come into play. But again, Rubio’s stance is well-known.

It’s not like politicians like Rubio are lacking for things to talk about. He’s among the most well-versed when it comes to foreign policy, for starters, and if all else fails, he can join everyone else in Washington by commenting on the Presidential election. But when it comes to abortion? We get it, you’re not a fan.