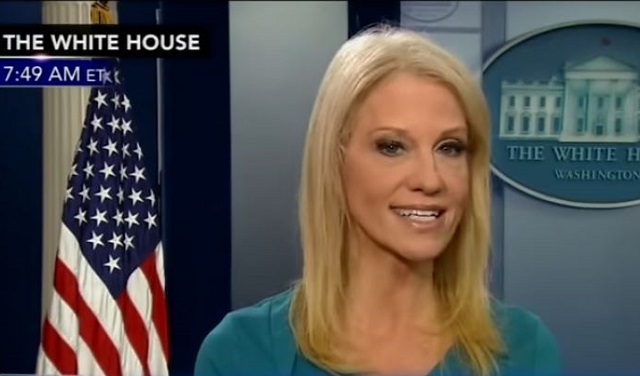 The media and members of Congress went nuts when Counselor to the President Kellyanne Conway used Fox News as a means for giving what she called a “free commercial” for Ivanka Trump‘s products. But what’s much more alarming than Conway using the White House briefing room to play saleswoman is that she’s sure to get away with it.

The Office of Government Ethics (OGE) responded to a letter from the House Oversight and Government Reform Committee on Tuesday, addressing their concerns over Conway’s promotion of Ivanka’s brand. The Committee asked the OGE to investigate the matter, claiming that Conway’s endorsement of a product while serving as a government employee violated ethics rules.

OGE Director Walter Shaub‘s response said that they agree with the Committee, but basically said there’s not a whole lot they can do about it. OGE’s power, which comes from Congress, allows them to make “an informal recommendation” for a government agency to investigate and consider disciplinary action, if OGE believes an employee violated the Standards of Ethical Conduct for Employees of the Executive Branch. Shaub says OGE did just that, sending a letter to the Designated Agency Ethics Official for the White House, requesting that they respond by the end of the month.

If that doesn’t work, then OGE themselves can recommend disciplinary action, but even that requires a lengthy process and is non-binding.

The big kicker, however, is when the employee in question works for the White House, like Conway does.  As Shaub says, if a government agency fails to abide by their recommendation for discipline, OGE can “notify the President if the agency fails to take appropriate disciplinary action.” But as they point out, when a White House employee is the subject of a disciplinary recommendation, the agency head who would be deciding whether or not to take action is the President. Therefore, as Shaub puts it, notifying the President that he himself failed to take action “would be ineffective.”

Why have an Office of Government Ethics if 1) they can’t actually do anything, and 2) there’s an entire agency (the White House) that has zero oversight? If the State Department or Justice Department failed to discipline someone, the President would be notified. But if the White House decides to protect their own, they’re completely free to do so! Conway’s little commercial may not have been the worst thing in the world, but I’m fairly confident that she’d be untouchable not matter what ethical violation she might commit.

It was obvious from the beginning that Trump wasn’t going to do anything to Conway because not only is she one of his top aides, but she was actively trying to help his daughter. But the fact that there’s no real independent body who can take disciplinary action is troubling.