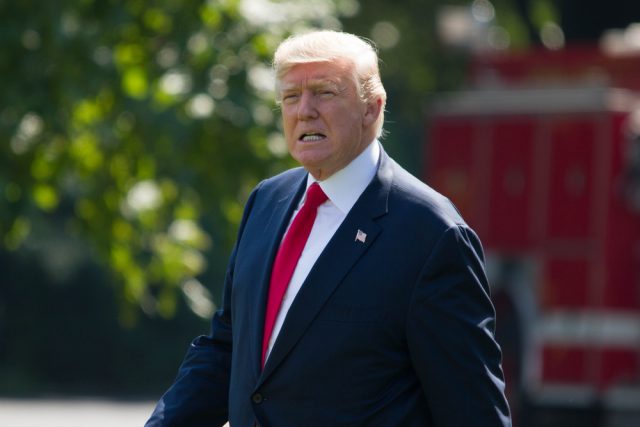 At a time when intelligent people everywhere are wondering how any rational human could possibly want to be professionally associated with Donald Trump, 45’s own lawyer is doubling down on lunacy. 76 year-old John Dowd is the newest addition to the president’s personal defense team, lead by the most-likely-to-be-disbarred Marc Kasowitz, and always-up-for-a-TV-argument Jay Sekulow. Dowd is an experienced Washington attorney who has represented Senator John McCain on congressional ethics charges, investigated Pete Rose on behalf of Major League Baseball, and unsuccessfully defended hedge fund founder Raj Rajaratnam on insider trading charges. Dowd’s role on the Trump Dream Team was to be its spokesman – a position for which Dowd has already proven to be basically disastrous.

Yesterday, as Americans of all political persuasions continued to struggle with Trump’s dreadful reaction to the violence in Charlottesville, Dowd chimed in in the dumbest possible way. Dowd forwarded an email that had been written by longtime conspiracy theorist Jerome Almon to journalists, government officials and friends. That email advocated protection of yet more Confederate monuments, relied on secessionist Civil War propaganda – and get this– declared that the group Black Lives Matter “has been totally infiltrated by terrorist groups.” The subject line of the email was, “The Information that Validates President Trump on Charlottesville,” and its body backed up Trump’s wisdom on blaming “both sides” this week.

One gem in the email was this:

“You cannot be against General Lee and be for General Washington. There literally is no difference between the two men. Both were great men, great commanders and great Americans.”

If it’s not creepy enough that the president appears to have a lawyer who is maybe a secessionist, it gets even weirder with the excuse he used for passing along the email. When Dowd was called out by the press for forwarding this ridiculous email, he tried to pass it off as if it didn’t mean anything. Dowd told The Washington Post that he “shares a lot of things with people” and said it was unfair to equate forwarding an email with espousing its contents.

Right. Because people always forward email jokes that they think aren’t funny, and recipes that they think aren’t tasty. Is this guy even serious? It’s bad enough that Dowd has joined this rag-tag team of ill-suited lawyers to try and protect Trump from the Russia investigation; for Dowd to expect that he can shield himself from accountability for what he says and does is beyond-the-pale stupid, even for a Trump advisor.

There are contexts in which forwarded emails might not indicate, “espousing the contents” of those emails. That context is your grandmother forwarding you a chain letter proclaiming that you’re the strongest woman she knows and warning that bad luck will befall you if you don’t forward it immediately to your ten closest friends. That context is not the president’s top attorney forwarding an email about incendiary current events to the executive branch and the press. Unless Dowd’s email contained a header that said, “example of what not to say at next press conference,” I really don’t want to hear it.

It’s truly unsettling that someone successful enough to make it to the president’s small council would be so confused as to how things work. Dowd forwarded the email on Wednesday morning to over two dozen recipients, including a senior official at the Department of Homeland Security, The Wall Street Journal, Fox News, and The Washington Times. One of those recipients predictably sent a copy to The New York Times, which then followed up by phoning Dowd to ask what he’d been thinking. His response? Outrage that The Times was “sticking [its] nose in [his] personal email.” “People send me things. I forward them,” Dowd reportedly told The Times, before hanging up on the reporter. If you are the spokesman for the president’s legal team, handling intrusive press would be filed under “things that go with the territory.” But in this case, we’re pretty damn far from the press “sticking its nose” into anything. Dowd sent this email out directly to the press, and then after realizing that doing so reflected badly on him, half-heartedly tried to backpedal – a technique which is becoming the Trump administration signature dance.

I’ve got to hand it to Dowd, though. I had been having a little bit of stupidity fatigue with the Trump administration messaging; after Scaramucci’s potty-mouthed interviews, I thought it’d be hard to raise the bar on the inanity. So this is my official thanks to John Dowd. The chief communicator for the president’s personal legal team attempting to curry sympathy for Confederates at a time when POTUS is sympathizing with white Supremacists has got me back in the game. And something tells me we haven’t reached the ceiling just yet.