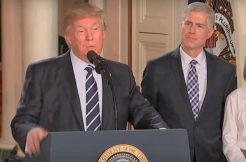 It’s useless trying to read President Donald Trump‘s mind, but we can still analyze the effect his actions may have. As he tries to blame U.S. District Judge James Robart for a hypothetical terror attack, the federal judiciary is getting a message: Rule my way, or get singled out. And this doesn’t just go for people chosen by past presidents. Would-be Trump judges, including Supreme Court nominee Neil Gorsuch, wouldn’t be blamed for wondering: What if I cross him?

This may well have a chilling effect on judges, who are supposed to be independent of the executive and legislative branches.

The president has an enviable opportunity. According to a December report from The Washington Post, Trump came into office with the chance to fill 103 federal judge seats. Obama had only 54 when taking office in January 2009. And no doubt, a great many of those future appointees are aware of this string of tweets from late Saturday and early Sunday:

When a country is no longer able to say who can, and who cannot , come in & out, especially for reasons of safety &.security – big trouble!

Interesting that certain Middle-Eastern countries agree with the ban. They know if certain people are allowed in it’s death & destruction!

What is our country coming to when a judge can halt a Homeland Security travel ban and anyone, even with bad intentions, can come into U.S.?

Because the ban was lifted by a judge, many very bad and dangerous people may be pouring into our country. A terrible decision

Why aren’t the lawyers looking at and using the Federal Court decision in Boston, which is at conflict with ridiculous lift ban decision?

The judge opens up our country to potential terrorists and others that do not have our best interests at heart. Bad people are very happy!

Just cannot believe a judge would put our country in such peril. If something happens blame him and court system. People pouring in. Bad!

I have instructed Homeland Security to check people coming into our country VERY CAREFULLY. The courts are making the job very difficult!

There are a lot of choice excerpts from that novella. You’re probably already aware of the “so-called” bit, so let’s point out two other parts.

1) “If something happens blame him and court system.” Wow.

2) “What is our country coming to”? I dunno: maybe an independent judiciary.

This is what Robart, a nominee of the second President Bush, gets for just issuing a temporary restraining order against Trump’s Executive Order banning people from seven Muslim-majority nations: emotional manipulation of the first order.

What effect will the president’s tweets have on Robart? Nothing much, practically speaking. Federal judges only stop working because of death, resignation, or the very rare impeachment process. Trump can’t just walk up to him and say “You’re fired.”

But it’s okay to be cautious about checks and balances, so we have to consider the difference between mere criticism, and outright intimidation. What we have to consider is the ways a president might attempt to tilt the judicial process in their favor, regardless of case law and the Constitution.

Our legal system, at its best, is all about arguing with good faith. Just because judges reached a decision on a “settled matter” doesn’t mean they’re beyond criticism. Robart—who, again, only issued a temporary restraining order—isn’t immune. It is possible and necessary to constructively point out possible flaws in his ruling. This is not a difficult thing to do. It has been done.

There’s more to it than that, however. Trump just doesn’t just criticize when it comes to public disagreements. Whether it’s apparently mocking a reporter’s disability, pointing out the nonexistent sex tape of a former Miss Universe, or yes, saying that a Mexican-American judge was biased against him because of his proposed wall, Trump’s public lashing of opponents (real and perceived) are built to degrade and embarrass.

Trump wields the bully pulpit like bad dog owners discipline pups who crapped in the dining room: Look at what you’ve done! Now put your nose in it! This seems to be his practice when he’s up against someone over whom he has no direct power. If he cannot fire someone, then he resorts to other methods of ostracization.

So imagine being a judge, or someone with judicial aspirations. Imagine getting a call from the White House. Imagine getting offered a seat on a federal bench. Hell, imagine just getting the honor to be interviewed for that position, one of the greatest jobs in the world. Then imagine opening Twitter, and finding out that the president just tried to shift blame for a hypothetical terror attack onto another judge.

How would you respond if you ever had to decide against the person who nominated you? How would you calculate the possible harm to your personal life if the President of these United States chose to single you out like an enemy? Imagine the possible hate mail from his supporters. Imagine the possible price to your family’s well-being. It’s one thing to get blow-back from a random protester. It’s another when your get it from the most powerful man in the world. Can you still do your job, and handle each case on its merits? I hope know that a great many people would still follow their education and training to act in good faith. But judges simply shouldn’t be in that position. They simply shouldn’t have to make that choice.

Imagine being Neil Gorsuch. No doubt he’ll get questions about those Tweets at his confirmation hearing.

[Screengrab via ABC; Gorsuch on right]