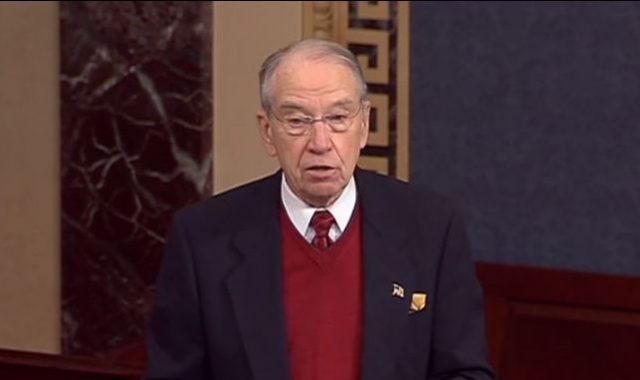 The much-talked about GOP memo from Rep. Devin Nunes (R-California) that makes claims about how the FBI was less than honest in its applications for FISA warrants targeting Trump campaign adviser Carter Page has been met with mixed reactions. Some have pointed out the bold accusations that, if true, paint a startling picture of the FBI, while others have claimed that it doesn’t say much at all. While we await the potential release of the Democrats’ own memo, another newly recently released document has somehow flown under the radar, despite raising issues that should not be ignored.

Earlier this week, a redacted memo from Senators Charles Grassley (Chairman on the Senate Judiciary Committee) and Lindsey Graham (not exactly the world’s biggest Trump supporter) was released that highlights some of the key issues referenced in the Nunes memo while also acknowledging one of its weaknesses. This memo calls for an investigation of Christopher Steele, who appears to have made false statements to the FBI.

The Nunes memo focused on the FBI’s failure to acknowledge the nature of the source behind the Steele dossier, upon which the feds relied in the warrant application. The memo claimed that the warrant application should have disclosed that Steele’s work was funded by the Democratic National Committee and the Clinton campaign, and because it did not, key information was kept from the court. Nunes eventually admitted that this was referenced in a footnote, which the Grassley/Graham memo, which was written in January. While Grassley and Graham say that the footnote didn’t mention the DNC or Hillary Clinton, it does admit that the dossier was said to be opposition research. Since Clinton was Trump’s opposition, the footnote was likely clear enough to give the Foreign Intelligence Surveillance Court (FISC) the information it need regarding who was ultimately behind Steele’s work.

Democrats, of course, would be happy to point to this and say, “See, the Nunes memo is nothing!” Of course, they would be very, very wrong, as Grassley and Graham point out.

As the Senators point out, something shady was going on with the dossier, whether it was by the FBI or Steele, and they want to get to the bottom of it. They refer to allegations made in the Nunes memo about how the FBI claims that Steele told them that he had not spoken to the media about his research. Of course, Steele later admitted to British officials that he had spoken about his work to news outlets including Yahoo! News, which ran an article about allegations against Carter Page that the FBI supposedly used to corroborate Steele’s dossier. The Nunes memo asserts that the Yahoo! News article relied on Steele himself as a source, which means that the FISA warrant used a dossier that was essentially corroborated by itself.

The FBI insists that as soon as they learned that Steele had indeed spoken to the press, they severed ties with him. Grassley and Graham point out that this raises two important questions: First, if the FBI realized that Steele had lied about talking to the press, wouldn’t this affect his credibility, and thus the strength of their renewal applications when they sought to continue monitoring Page? And second, why isn’t the FBI pursuing charges against Steele for lying to them?

It seems pretty clear to me that the questions answer themselves. In this whole mess, either Steele was lying, or the FBI was. The feds can make the assertion that when they first made their application for a FISA warrant against Page, they had no idea that the article corroborating the dossier was suspect, because Steele told them he wasn’t talking to the press. Their argument for continuing to rely on the dossier in their renewal applications can — weakly — claim that if Steele lied, it was after providing them with information, and his info had been reliable in the past, so they feel comfortable relying on it still. The only person who can truly refute such assertions if they’re false is Steele himself.

If the FBI now turns around and charges Steele, which is what Grassely and Graham are daring them to do, that would open up an investigation, at which point who knows what Steele might say. He could reveal that the FBI knew all along that his research was corroborated by itself. He could also talk about where he got some of his information.

See, the Senator’s memo also seems to indicate that there was something rotten in the State Department. It mentions how Steele received a number of “unsolicited” and “unverified” reports, including at least one from a State Department source who got information from a foreign sub-source who was in touch with a friend of the Clintons.

My guess is the less we know about this one, the happier the FBI will be.

Remember, the dossier was always problematic. That’s why BuzzFeed came under so much fire for publishing it in the first place. Other outlets already had copies of it and chose to keep it quiet because it was unverified. If the mainstream media, which is not exactly kind to President Trump, didn’t release the dossier because they didn’t trust it, why would the FBI rely on it?

Perhaps the Democrats’ memo will put all of this information in a new light, revealing a broader context for all of this that shows that the FBI truly did nothing wrong. Maybe there’s plenty of evidence that we haven’t seen yet that proves that the dossier was not the true basis for the FISA warrant. Honestly, I really hope that’s the case, because the alternative is truly scary.