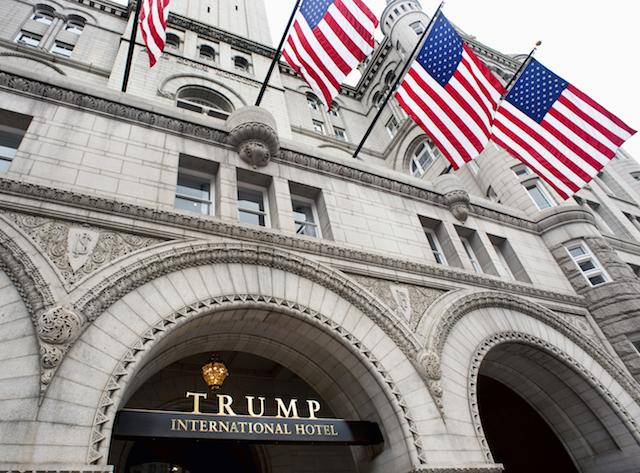 It’s laughable for anyone to feign certainty about the fate of CREW v. Donald J. Trump, which was filed Monday morning in the Southern District of New York. The case, brought by Citizens for Responsibility and Ethics in Washington (“CREW” — a government watchdog group) alleges that President Trump has already violated the “Emoluments Clause” of the Constitution by maintaining ownership of his businesses. The general theory is that under the Constitution, the President has an obligation to insulate himself from any foreign influence that would come in the shape of gifts or profits, and that the kinds of profits Trump receives through his international corporation are precisely the kind that violate such an obligation. In other words, presidents can’t take bribes, and doing business with foreign governments and large foreign companies is something of a bribe per se.  Some, including Trump,  have already brushed off the case as “totally without merit,” However, that is just not true. While the lawsuit may have a long road ahead, there are some ways that the prominent ethics attorneys, who filed the lawsuit, could prevail.

Before we take a closer look at the lawsuit itself, here’s a refresher on the Emoluments Clause. Under Article I, Section 9, it says:

“No Title of Nobility shall be granted by the United States: And no Person holding any Office of Profit or Trust under them, shall, without the Consent of the Congress, accept of any present, Emolument, Office, or Title, of any kind whatever, from any King, Prince or foreign State.”

If you’re wondering why you’ve never heard of this Constitutional nugget prior to this week, it’s because it almost never comes up. Very few lawyers or judges are Emoluments Clause experts, because there hasn’t been any litigation on this subject. Ever. It’s certainly worth pointing out that one reason “emoluments” aren’t on the tip of the average American’s tongue is that presidents pretty much always divest themselves of business entanglements prior to taking the oath of office. This lawsuit is just another reminder that we’re in a new world now. You’re welcome.

On to the lawsuit itself. Plaintiff CREW is not seeking money damages, but is rather asking for the kind of injunctive and declaratory relief that would spell out what Trump is and isn’t allowed to do from here forward, and which would prevent our president from lining his personal pockets with foreign coins.

(b) room reservations and the use of venues and other services and goods by foreign governments and diplomats at Defendant’s Washington, D.C. hotel;

(c) hotel stays, property leases, and other business transactions tied to foreign governments at other domestic and international establishments owned, operated, or licensed by Defendant;

(d) payments from foreign-government-owned broadcasters related to rebroadcasts and foreign versions of the television program “The Apprentice” and its spinoffs; and

(e) property interests or other business dealings tied to foreign governments in numerous other countries.

As fun as it would be to spend our time boasting that we know Trump’s behavior does or does not violate the Emoluments Clause, such a debate is wildly premature.

There are three preliminary questions to consider first, and warning: none of them require juicy comparisons such as whether Trump’s international hotels are the same things as foreign leaders buying a copy of Obama’s book from Amazon, or whether George Washington accepted birthday gifts from France.

CREW must first prove that it has standing to sue. Standing can be pesky. It’s the requirement that if you’re going to sue someone for wrongdoing, you have been actually harmed by that person’s wrongdoing. The requirement for standing is what stops individuals from suing when they simply don’t like laws that have been passed. Trump’s people will undoubtedly argue that no one, least of all CREW, has been actually harmed by any business dealings between Trump International and any foreign entities. No one (other than perhaps a competing hotel or business owner) can claim financial losses, so there simply is no basis for CREW to bring a lawsuit. CREW certainly anticipated such an argument, and laid out twenty-seven ways it has been harmed by Trump’s alleged violation of the Constitution. Most of the alleged injuries amount to CREW’s having been forced to dedicate its already thin resources to monitoring Trump’s conflicts of interest. CREW also alleged injuries to the competitors of Trump’s businesses who have lost and will continue to lose business as foreigners clamor to curry favor by doing business with our commander in chief.

CREW’s argument on standing is certainly a good effort, although hardly a sure thing. While CREW does stand somewhat at arm-length from actual harm, it would hardly be crazy for a Judge Ronnie Abrams to rule that CREW has been unduly burdened by the unprecedented potential for conflict of interest. Add that together with general legal logic on bribery – that the public as a whole suffers when officials are on the take – and CREW may have a winning argument on standing.

The second hurdle the plaintiffs will need to overcome is to prove that the question raised by this lawsuit is one properly answered by the courts, or whether it is simply a “political question.” The difference between a “justiciable issue” and a “political question” is complex, and often requires significant analysis. At the core of the analysis, though, is the issue of whether the court deciding the underlying lawsuit would have law and precedent from which to draw. The less clear the available legal rules, the more likely the dispute is a policy question best handled outside the judiciary.

Again, things could go either way here. Judge Abrams (who happens to be the sister of LawNewz.com founder Dan Abrams) could opt to punt the case to Congress with a nod toward the start of impeachment proceedings.  On the other hand, she could read the Emoluments Clause in the same way so many other experts have, and rule that the plain language of the clause is clear authority to hold Trump accountable for obviously and egregiously breaking a foundational rule of the presidency. The Emoluments Clause may not have been the subject of too many lawsuits, but conflicts of interest are hardly unfamiliar concepts to federal judges. Bottom line here, if Judge Abrams wishes to find a basis for presiding over this lawsuit, she could find one.

The final pre-merits argument sure to arise in this case is whether the Emoluments Clause applies to the president at all.  Some legal scholars have argued that the president is not an “Officer” of the United States, and is therefore not bound by the clause in any regard. Honestly, that sounds stupid to me, but I suppose it’s possible that the Trump people could convince a judge that other government officials must avoid conflicts while the president is free to take what he wants from whomever is offering. More likely, though, I think any judge would rule that if there were ever a situation to which the Emoluments rule applies, this is it.

Viewed through the lens of a president who has refused to turn over personal financial documents, who has separated himself from his business only insofar as putting his children in control, and who has been widely accused of having improper relations with foreign governments – this rule either applies to President Trump or has no meaning whatsoever. Furthermore, the closest analogous matter is the case of President Barack Obama, who sought permission from the Office of Legal Ethics (“OLE”) to accept the $1.4 million award as part of the Nobel Peace Prize. In 2009, the OLE released a memorandum specifically opining that Obama’s acceptance of the prize did not violate the Emoluments Clause, because the prize had been awarded by a private institution, and not by a foreign government. President Obama accepted the award and donated the proceeds to a number of charities. Nothing in OLE’s 13-page memo, though, indicated that the president – even one who was a Nobel laureate—was exempt from the Emoluments Clause. Sometimes, comparisons are just too tempting, and memories are too long; on this issue, my money is on Judge Abrams ruling that if the Emoluments Clause was good enough for Obama, the OLE, and the Nobel Prize it’s good enough for Trump and his hotels. President Trump may have argued that a president “cannot have a conflict of interest,” but something tells me that argument is not likely to fly in a courtroom.

If CREW v. Trump is able to withstand the triple hurdle, it will move on to the discovery phase. Only then, once we see what evidence is adduced and to what extent foreign governments are involved with Trump’s businesses, will we move on to the substantive issue of whether the Emoluments Clause has actually been violated.