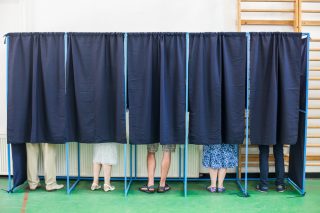 Russian media is reporting that representatives from their country’s Central Election Commission had “a series of talks” with the U.S. State Department, asking about sending people to monitor U.S. polling stations during the November 8 elections.

After all of the allegations that the Russian government has hacked the networks of American political organizations, they want to send people to the actual physical polls? Even if the allegations are false and Russia has nothing to do with the hacks, asking the U.S. government to do this is pretty ballsy.

According to RT.com, “U.S. officials categorically rejected even the possibility” of Russian monitors being present at polling sites. The U.S. does allow a certain number of monitors from the Organization for Security and Cooperation in Europe, and officials reportedly told Russia they can join that mission, if they so desire.

The same report says that Russia also contacted a number of states about monitoring the election proceedings, saying that Texas, Oklahoma, and Louisiana used “very harsh formulas” to reject them. “[I]n Texas they even threatened to hold monitors who appear at ballot stations criminally responsible,” sources reportedly told the Russian Izvestia daily publication.

Vasily Likhachev, of the Central Election Commission’s international relations department, said called the rejection an example of the State Department’s “Russophobic trends,” according to RT.com. “Americans obstruct Russia’s attempts to monitor their elections because they see them as a threat,” he said. Likhachev said that Russian experts will still monitor the polls remotely.

Individual states maintain the authority to approve or deny requests from outside parties to observe their elections. We understand that the Russian Embassy intended to approach local authorities for assistance observing elections.

This appears to at least be in line with the report that Russia reached out to states, and the State Department didn’t confirm or deny whether they had a “series of talks” with the Russian Central Elections Commission. They’re just saying they didn’t shoot them down, the way the Russian report would have you believe.

I just have to wonder, what kind of game is Russia playing? Are they trying to antagonize the U.S. government? Maybe they want to cast doubt on our democratic process? Perhaps they’re just messing with us for kicks. Whatever it is, it’s getting ridiculous.

This article has been updated to include and reflect the statement from the State Department.

This is an opinion article. The views expressed in the article are of those of the author.