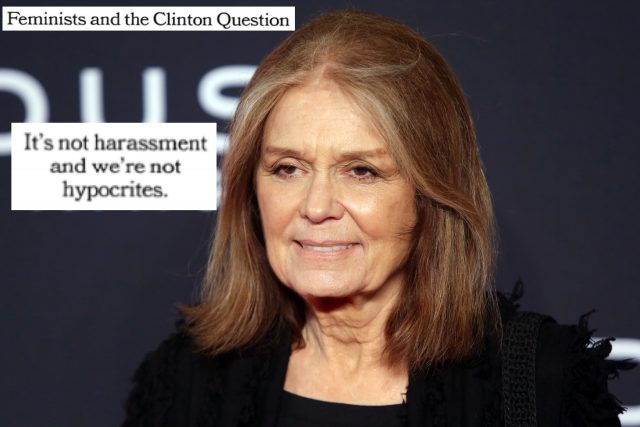 The Great Threshing rolls on. Fortunately, it’s not a partisan issue; sexual abusers are being outed literally left and right. But some professional feminists are doing their level best to make it one-sided AF.

Yesterday, Lena Dunham shocked absolutely no one by defending her white male friend against allegations that he raped a black actress in 2012–when she was seventeen. (she has since apologized)

Aurora Perrineau went public with her allegations against “Girls” writer/producer Murray Miller on Friday. According to The Wrap, Perrineau claims Miller raped her while she was asleep after her friends gave him a ride home and decided to hang out at his place. She said, in a statement:

At some point, I woke up in Murray’s bed naked. He was on top of me having sexual intercourse with me. I freaked out and was extremely upset and traumatized. At no time did I consent to any sexual contact with Murray

So, a prominent, rich and powerful liberal stands accused of rape. Thus, in one swooping set of keystrokes Lena Dunham goes from this, “Things women do lie about: what they ate for lunch. Things women don’t lie about: rape.”

I believe in a lot of things but the first tenet of my politics is to hold up the people who have held me up, who have filled my world with love.

That’s not a description of any sort of politics. It’s a description of Dunham’s class loyalty. She’s rich and loyal and supports others like her–liberal fans and boosters of Lena Dunham–who are also rich and loyal. Dunham’s professed feminism is both a mallet and a shroud–used to occasionally smash her critics across the face while simultaneously cloaking her genuinely vile and reactionary opinions.

Also yesterday, feminist author Kate Harding, brought the kind of disrepute often mistaken for credit among wide-eyed liberals to the op-ed pages of the Washington Post by suggesting that Senator Al Franken should get a pass on his alleged groping and forced kissing of model Leeann Tweeden.

Why should Franken get a pass, according to Harding? Because he’s a Democrat. And Democrats mostly support abortion. Here’s Harding tweeting out the genesis of her ill-conceived essay extolling the virtues of hypocrisy:

Democracy 2017: I am sincerely arguing that we should not force a Democrat to resign for sexually abusing a woman, because I know Republicans never will, and that once the first Democrat goes, R’s next move is finding shady Ds from states with R governors.

Harding, of course, spent the better part of the past two years claiming that Bernie Sanders and his supporters are sexists largely indistinguishable from the right-wing. In service of her anti-Sanders campaign, Harding also found time to fawn over and make the feminist case for Senator Lindsey Graham.

But none of this selective outrage is new.

At the height of national attention focused on alleged rapist-in-chief Bill Clinton, storied feminist Gloria Steinem used her podium to defend Clinton (and drag his accusers) in the opinion pages of the New York Times. The Atlantic‘s Caitlin Flanagan summed up Steinem’s op-ed thusly:

It slut-shamed, victim-blamed, and age-shamed; it urged compassion for and gratitude to the man the women accused. Moreover (never write an op-ed in a hurry; you’ll accidentally say what you really believe), it characterized contemporary feminism as a weaponized auxiliary of the Democratic Party.

And, let’s never forget Hillary Clinton’s defense of Bill’s copiously documented history. Hillary shamed the accusers and went to bat for her man–not as a wife, but as a political ally. Hillary said the claims were false and nothing more than the theatrics of a partisan witch hunt. (Roy Moore is sticking to that script, written by Hillary, now.)

Moreover, Hillary and Bill always sold themselves as a two-for-one deal. They switched their political ambitions around to suit one another. They were always each other’s top advisers. Hillary and Bill have been inseparable from the beginning and remain that way until the end. So, her defense of Bill and dismissal of the women who accused him is actually quite important and politically telling.

The term “professional feminist” is intentionally derogatory and derisive. It should be employed against self-proclaimed feminists whose only cognizable function in society is to: (1) use feminism in defense of the liberal establishment; and (2) self-aggrandize by way of their performative wokeness.

1. Lena Dunham plays a feminist online but is more accurately encapsulated by this tweet:

Lena Dunham is that girl in high school who thinks no one likes her because she’s “different” and “people just don’t get her humor”, but really she is just a narcissistic, pretentious piece of shit who smells like damp clothes and gentrification.

2. Kate Harding is a Clinton cultist whose greatest visible achievement is that she’s mostly capable of dressing herself each morning. And Harding is such a professional caricature of feminism that she admittedly supported Clinton over Sanders simply because Clinton is a woman–policies didn’t matter one bit.

3. Gloria Steinem is a second wave feminist and former CIA asset who targeted left-wing college students. Her brand of feminism is famously not intersectional. She’ll never apologize for the damage she’s done to progress, feminism or non-white women’s lives–who, as Roqayah Chamseddine has noted–are consistently erased by her ilk’s atrocious brand of white feminism.

4. Hillary Clinton’s version of feminism is a cudgel used to protect and enlarge the personal and political fortunes of Hillary Clinton. She recently crawled out of her nest in Chappaqua to defend her husband and Al Franken while trying to credulously slam Donald Trump and Roy Moore for alleged sexual abuse. Sigh.

And, without fail, each and every liberal-defending, professional feminist act this way ultimately in service of the Democratic Party–an organization that acts like it owes the average woman nothing, promises less and achieves accordingly.