In a seemingly made-for headlines set of facts, TMZ reported today that Harvey Weinstein’s being fired from his namesake company may have been illegal, because his employment contract allowed for sexual harassment. As Hollywood as such a contract might appear, let’s not lose our minds just yet.

Here is the website’s headline: 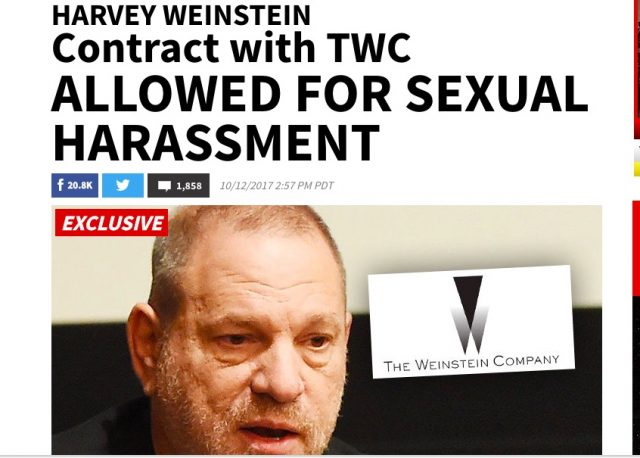 According to TMZ, Weinstein’s contract included a “liquidated damages” clause in which he would be obligated to pay the company $250,000 for a violation of the company’s Code of Conduct, and sums that increase by $250,000 for each additional violation, up to $1,000,000 per violation. “Weinstein could get sued over and over for sexual harassment and as long as he shelled out money,” wrote TMZ. That sure sounds messed up, but let’s analyze whether TMZ’s take on this squares with reality.

First, a million-dollar-per-incident penalty is a pretty expensive game of grab-ass. Production fees aside, I think it’s going a bit far to characterize this seven-figure penalty as if it would operate like paying a parking ticket when one can’t be bothered finding a legal spot. More importantly, though, this take on Weinstein’s contract may be glossing over the rules of liquidated damages clauses more generally.

“Liquidated damages clauses” are portions of contracts that attempt to name a dollar amount in damages to which an aggrieved party is entitled in the event of a breach. The purpose of these clauses is to put everyone on notice as to what’s at stake, and to minimize the scope of litigation down the line if the contract is breached. The catch is, though, these clauses are often unenforceable. Generally speaking, for a liquidated damages clause to be honored by any court, that clause must be a fair estimate of the actual damages at the time the contract was drafted, and cannot constitute some kind of excessive penalty. Generally, liquidated damages clauses must also be both necessary (in that actual damages would be difficult to completely ascertain) and voluntary (in that both parties understood the risk they were undertaking).

Assuming that the clause referred to in the TMZ article is, in fact, a liquidated damages clause, there’s nothing inherently sinister about its inclusion in Harvey Weinstein’s employment contract. If Weinstein was expected to adhere to a Code of Conduct, it stands to reason that he might violate that obligation. Since standard harassment and sexual harassment claims take many forms, it would be exactly the kind of provision ripe for a liquidated damages clause; the clause’s inclusion in Weinstein’s employment contract might well be an example of good legal drafting, and not some kind of evil Hollywood sanction of predatory behavior.

The TMZ article goes on to say that Weinstein’s contract allows for his termination in the event of criminal behavior (not applicable here, at least yet), or material fraud, and that “before he can be fired he has a right to mediation and if that doesn’t work, he’s entitled to arbitration. He got neither. He was summarily fired, and sources connected with Weinstein tell TMZ he was never given a specific reason.”

It may well be true that Weinstein was entitled to some due process, such as arbitration, before being fired. Certainly, he’d be entitled to pleading his side of the incredibly damning story before being thrown out on his ear. But let’s just grab an ounce of common sense for second. Contracts are an “equity” subject. That means that in the event of a contract dispute, courts will generally do what they think is fair. It seems exceedingly unlikely that any court would disallow an employer to fire an employee for being an alleged serial sexual predator. I’ll bet TWC called its counsel before cutting Weinstein loose, and I’ll be that call went like this: “Get him out of here before he causes any more problems. Don’t worry about the contract. We’ll take care of it.”

It’s unclear right now whether TWC would need to characterize Weinstein’s behavior as “fraud” or if there is some other contractual language better suited to back up its decision. But I’m going to go on record as saying that TWC will find something in Weinstein’s contract that authorized it to can Weinstein, and that any court being asked will agree.