Investigating Trump For Alleged Sexual Wrongs Might be Unconstitutional 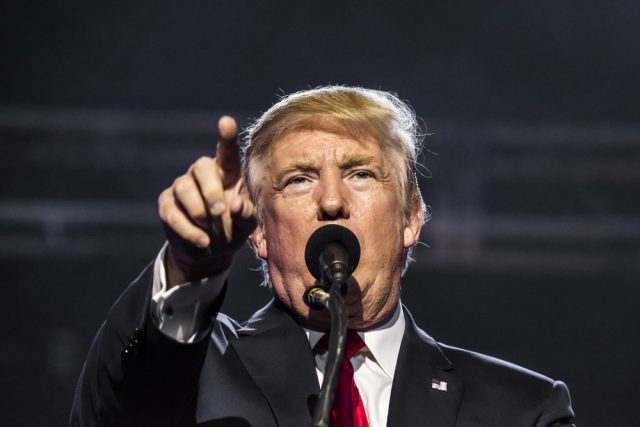 Senator Kirsten Gillibrand who – along with Senators Bernie Sanders, Jeff Merkley, Ron Wyden and Cory Booker – has urged President Donald Trump to resign over his alleged sexual wrongdoing, said that if he did not “immediately resign,” Congress “should have appropriate investigations of his behavior and hold him accountable.”

But holding investigations – much less impeaching him – would raise serious constitutional questions, and perhaps even provoke a constitutional crisis.

While many have suggested that a Republican dominated House would never vote to impeach Republican Trump, some astute observers have long suggested the possibility.

For example, Professor Allan Lichtman, who reportedly was one of the few prominent prognosticators to predict Trump’s victory, has also predicted that “Trump would eventually be impeached by a Republican Congress that would prefer a President Mike Pence – someone whom establishment Republicans know and trust. . . .  I’m quite certain Trump will give someone grounds for impeachment, either by doing something that endangers national security or because it helps his pocketbook.”

More than a year ago, prominent columnist David Brooks predicted that “the guy [Trump] will probably resign or be impeached within a year.” In view of all that has occurred since then, and many of the things he has done since taking office which might reduce some Republican chances for re-election in 2018, the number of Republicans who might be willing to impeach Trump – and possibly replace him with Pence – may well have grown.  After all, impeachment requires only a majority vote, unlike removal which requires a two-thirds vote of the Senate.

But, although the issue is far from clear, there is precedent that a sitting president can be impeached – and removed from office by impeachment – only for wrongdoing committed while in office; a limitation which would preclude impeaching him based upon the claims of sexual misconduct made public so far.

In 1873, while considering the impeachment of Vice President Schuyler Colfax, the House Judiciary Committee concluded that impeachment “should only be applied to high crimes and misdemeanors committed while in office and which alone affect the officer in discharge of his duties as such, whatever may have been their effect upon him as a man, for impeachment touches the office only and qualifications for the office, and not the man himself.”

If this precedent still controls and is followed, Trump could not be impeached for any types of sexual misconduct which occurred in the past, no matter how serious nor how compelling the evidence.

On the other hand, and more recently, federal Judge Thomas Porteous was impeached and then removed from the bench for attempting to conceal, during his confirmation process, various prior wrongful acts – although the behavior on which impeachment was based occurred while he held a prior federal office.

Thus, as the Congressional Research Service has reported, “it does not appear that any President, Vice President, or other civil officer of the United States has been impeached by the House SOLELY on the basis of conduct occurring before he began his tenure in the office held at the time of the impeachment investigation.” [emphasis in the original]

On the other hand, on several occasions, the House of Representatives has at least investigated allegations of alleged wrongdoing which occurred before the person under investigation assumed the office from which he might be impeached.

But, in all such situations, the alleged wrongdoing occurred while the person did hold some kind of federal office – unlike Trump, who held no office at the time during which the various sexual wrongdoings allegedly occurred.

Thus precedent strongly suggests that impeachment cannot be based upon any sexual wrongdoing which allegedly occurred before Trump became president, and that even an investigation for that purpose would be constitutionally suspect.

In other words, it might be unconstitutional for Congress to seek to “hold him accountable” as Gillibrand suggested, and any attempt to do so could easily precipitate a constitutional crisis.

Another major issue concerning the proposed investigation would be whether anything related to sex that Trump has been accused of doing could possibly be found, even after the most thorough investigation, to constitute the “high Crimes and Misdemeanors” which Article II, Section 4, of the Constitution sets forth as the standard for impeachment.

While it seems clear that the conduct in question need not necessarily constitute a crime, it may have to be more serious than many of Trump’s alleged wrongdoings to justify removing him from office.

By way of comparison, a female federal judge ruled that even if President Bill Clinton had lured a young female employee up to his hotel room, exposed his penis to her, and requested that she sexually satisfy him orally, such conduct constituted neither a civil tort nor even sexual harassment.

Given that history has shown than many prior presidents – not to mention governors, senators, and representatives – have had numerous sexual affairs, and probably violated other norms of sexual conduct prevalent at the time, any precedent which would allow the House to investigate a president’s sexual conduct prior to taking office would have to be carefully evaluated.

Especially if the House were controlled by a political party hostile to a sitting president, the ability to issue subpoenas, compel testimony under penalty of perjury, hold hearing certain to be widely televised, etc. could easily be abused, causing at least grave embarrassment if not worse to any president.

If these sexual wrongdoing are deemed serious enough that Congress should hold Trump “accountable,” perhaps it would be better to use other powers it possesses under our system of checks and balances – e.g., withhold certain appropriations, refuse to confirm his nominations, etc.