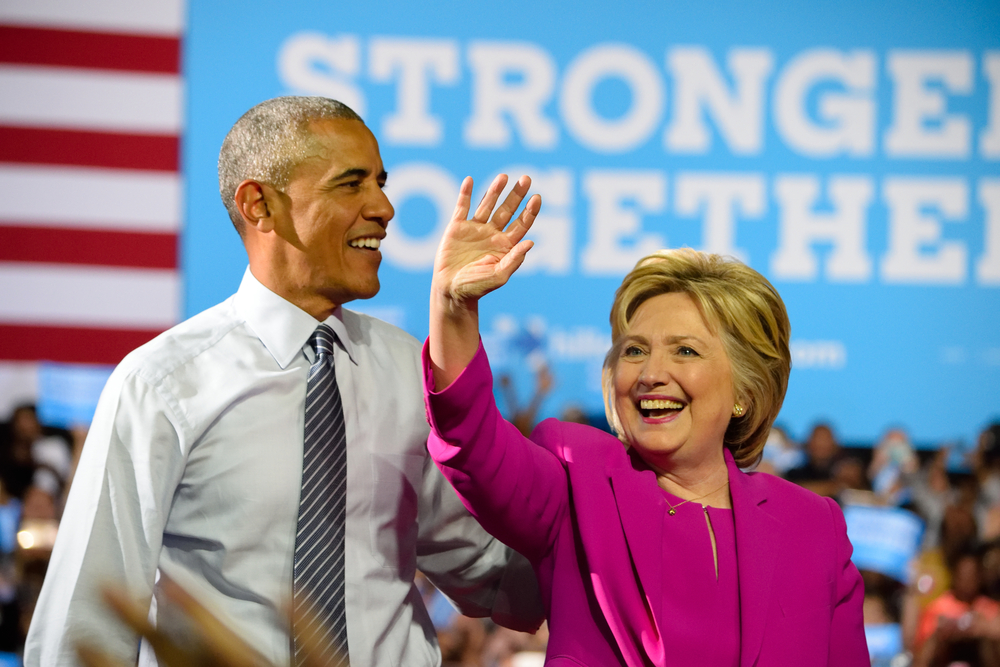 As bits and pieces from her losing campaign memoir continue to trickle out like the weak stream from a paid kompromat artist in some tawdry-if-fanciful Russian spy drama, the former secretary of state seems intent on blaming everyone under the sun–including her never-to-be predecessor, Barack Obama.

The latest drip-drip release from What Happened? contains an altogether gem-like case of deflection. Part of a review by Mark Landler in the New York Times, reads:

She made a connection between Mr. Obama and what she called her biggest gaffe of the campaign: telling voters in Ohio, “We’re going to put a lot of coal miners and coal companies out of business.” Mrs. Clinton insisted that the line was taken out of context, but said Mr. Obama had fed the narrative of Democratic hostility toward coal miners by announcing a plan that set state-by-state targets for carbon emissions reductions, and a framework for meeting them, at the White House, next to the head of the Environmental Protection Agency.

That plan, known as the Clean Power Plan, was issued by President Obama and then-Environmental Protection Agency Administrator, Gina McCarthy on August 3, 2015 in order to combat climate change. The section of the plan related to coal mining states:

Investing in Coal Communities, Workers, and Communities:  In February, as part of the President’s FY 2016 budget, the Administration released the POWER+ Plan to invest in workers and jobs, address important legacy costs in coal country, and drive the development of coal technology. The Plan provides dedicated new resources for economic diversification, job creation, job training, and other employment services for workers and communities impacted by layoffs at coal mines and coal-fired power plants; includes unprecedented investments in the health and retirement security of mineworkers and their families and the accelerated clean-up of hazardous coal abandoned mine lands; and provides new tax incentives to support continued technology development and deployment of carbon capture, utilization, and sequestration technologies.

Clinton’s quote about putting coal miners out of business was a bit divorced from context. She originally posed the damning soundbite as a rhetorical question and was discussing her plan to bring economic relief and new–renewable–technology to coal country. That then-candidate Donald Trump turned the meaning on its head was both unfair and entirely predictable.

Clinton’s hostility to Obama’s plan, however, is a bit perplexing. She seems to be blaming the former president for announcing the sort of plan that she herself was keen on implementing. Even more mind-boggling is how Clinton apparently claims Obama’s plan “fed the narrative of Democratic hostility toward coal miners”–at least at first glance. Here, she’s essentially accusing President Obama of doing what the vast majority of Democratic Party voters want Democratic Party politicians to do: fight climate change by phasing out environmentally harmful industries.

And, not to put too fine a point on it, but here’s the basic issue: Hillary Clinton is blaming an official (460-page) administrative rule change inserted into the Federal Register for her campaign’s failure to win over coal country and then categorizing that rule change–which was the result of years of consultation between the EPA, the White House and untold numbers of lawyers–as Barack Obama feeding a narrative–instead of, you know, using a small amount of executive authority to fight climate change.

But maybe this shouldn’t be too much of a surprise after all.

Hillary Clinton has no moral vision. In other excerpts from What Happened?, she takes the time out to ridicule her primary rival Bernie Sanders‘ mild socially democratic policies as the politics of promising ponies. This was a consistent refrain during the Democratic primary when the former secretary of state once literally shouted that single-payer healthcare will, “never, ever” happen.

It now appears that Bernie Sanders’ ideas are winning over rank-and-file Democrats so much that single-payer healthcare is the soon-to-be litmus test for Democratic politicians seeking higher office. It turns out ponies aren’t actually that elusive or expensive.

Hillary Clinton is also a vain narcissist who can’t accept blame–even when purporting to do exactly that. So, hey, why not take an epic fail of a potshot at an extremely popular ex-president? And why not do so for words that came out of her own mouth?

Clinton has been subject to a torrent of unearned and unfair abuse, absolutely. But, here, as always, her biggest wounds are self-inflicted. Let’s call it: “Wisconsin Avoidance Dysphoria.”

Republicans have often been the ones making such misogynistic, sexist and unfair attacks on Hillary, but they have gotten one thing right: Some Democrats just aren’t big on personal responsibility.