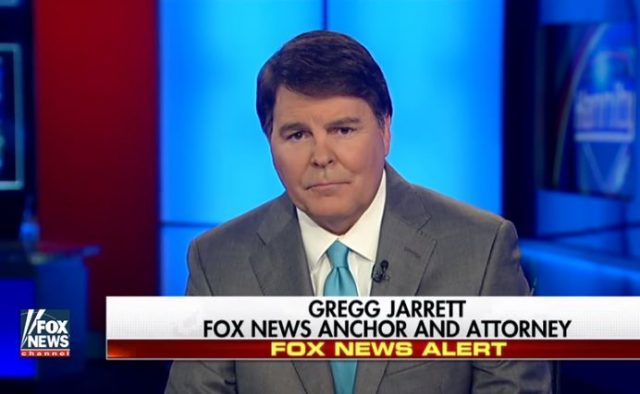 In an attempt to discredit Robert Mueller‘s Russia investigation, Fox News legal analyst Gregg Jarrett really came out swinging after Mueller filed a response in which he put forward his legal justification for going after former Trump campaign chair Paul Manafort. However, the problem with Jarrett’s tweet, which has been retweeted 13 thousand times (and counting), is that it actually makes no legal sense. Jarrett’s tweet completely twists around the real story and pushes a new conspiracy theory that Mueller and Rosenstein somehow broke the law.

Unethical Mueller, in his court filing, admits that Rosenstein’s order appointing him was intentionally vague. This violates the special counsel law that requires a specific statement of facts to be investigated. Rosenstein and Muller [sic] colluded to break the law and should resign

As for background on all of this, Manafort’s legal team contends his indictment should be dismissed because Mueller doesn’t have the authority to investigate him in the first place for alleged crimes that were not directly related to Russian election meddling.

Mueller’s team filed their own response Monday evening saying they do indeed have that authority based on the special counsel regulations because Rosenstein provided Mueller with a specific factual statement of the matter to be investigated.

In an August 2017 memo, Rosenstein gave Mueller authority to investigate Manafort for “crimes arising out of payments he received from the Ukrainian government before and during the tenure of President Viktor Yanukovych.” And that’s precisely what Manafort was indicted for.

“The August 2, 2017, memorandum from Rosenstein provided more detailed – and, importantly, confidential – areas that the Special Counsel can investigate, but that in no way means that the original order was ‘vague’,” explained former federal prosecutor Daniel Goldman. “The original order set forth with sufficient specifics what the Special Counsel’s mandate is. Because the investigations are confidential, Rosenstein could not publicize more than what he included in the original order, but that is more than enough to provide a ‘specific factual statement of the matter to be investigated’; as the regulation requires.”

Sure, there are some legitimate concerns about Mueller’s investigation of Paul Manafort, especially involving the aggressiveness of the July 2017 raid on his home. In a previous analysis, I pointed out the oddity of the Rosenstein memo coming out after the feds had already conducted the raid. And, you might even argue that the special counsel regulations are unfair, too broad or not transparent enough. However, to contend that Rosenstein and Mueller somehow conspired to break the law by apparently following the exact letter of the regulations regarding special counsel investigations is a bit absurd to say the least.

Plus, what law exactly did Rosenstein and “Muller” break here? First off, the rules surrounding limitations for special counsel investigations are regulations not laws. Secondly, as Gregg Jarrett himself previously pointed out, there is no such crime as collusion. To quote Jarrett’s May 2017 article, “Why, then, are so many people who are following the Trump-Russia saga under the mistaken impression that collusion is a crime? Principally, because it is a loaded word with an historic criminal connotation.”

Update 4/4/2018 Gregg Jarrett responded to my column. Here is his response in full:

“There is a special counsel law.  It is found in the Code of Federal Regulations which are codified into law.  (Thus, the term “code”.)  It’s called “administrative law”.  The section of the law setting forth the appointment of a special counsel can be found at 28 CFR 600.1, et al

As Law & Crime’s own Ronn Blitzer noted in his story yesterday “Mueller’s appointment order was intentionally vague. ” Ron argued that “doesn’t make it illegal”, but I disagree.  The vagueness of the order was admitted by Rosenstein in his August 2ndmemo/order (Attachment C to the court documents) when he wrote, “The May 17 order was worded categorically in order to permit its public release without confirming specific investigations involving specific individuals.”   The intentionally vague wording of the original order violates the requirements of the special counsel law that states there must be a “specific factual statement of the matter to be investigated.”  Yet, Rosenstein’s original order provided no such thing.  Former Attorney General Michael Mukasey, who was also Chief Judge of the U.S. District Court in New York, agrees (see his WSJ column of February 4, 2018).  In her email, Rachel states, “The original order set forth with sufficient specifics what the Special Counsel’s mandate is.”  That’s her opinion.  Mine is quite different, and so is Mukasey’s opinion.  Rosenstein could have been more specific without jeopardizing “confidential” information.  He chose not to do so.  This is the basis for Manafort’s motion to dismiss –that Mueller lacks authority because Rosenstein’s original order did not comply with the special counsel law.”

As for the law that Rosenstein and Mueller broke? Jarrett respond, “They violated the special counsel law, as noted above.  I did not accuse them of committing a crime.”