Don’t Fall for Dr. Dao’s Attorney, for Him This Case is Clearly About Money 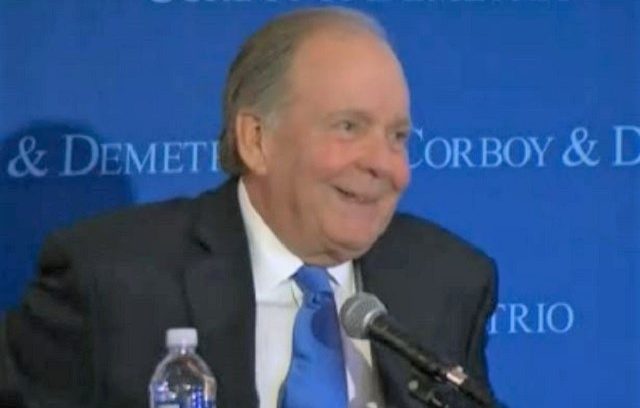 Days after Dr. David Dao was physically dragged out of his seat and down the aisle of a United Airlines plane when the aircraft had a lack of space and no one volunteered to give up their paid seats, his attorney, Thomas Demetrio held a press conference. Minutes into the hour-long event, it was clear that the conference was more about Demetrio than his client.

It started off innocently enough, with Demetrio discussing legal standards for Dao’s situation. “If you’re going to eject a passenger, under no circumstances can it be done with unreasonable force or violence,” he said. “That’s the law.”He talked about how in his client’s case, officials had no right to use physical force.

However, Demetrio quickly started to frame Dao’s horrible experience as a symptom of a greater problem in the airline industry as a whole, and one that needs to be addressed now, by him and on behalf of everyone.

“For a long time, airlines — United in particular — have bullied us,” Demetrio said. “They have treated us less than we deserve … we want fairness in how people treat us, we want respect, and we want dignity.” He was seemingly using this incident to rally people to some sort of greater cause against our evil aviation overlords.

But it didn’t come across as a call to arms to right some terrible wrong, so much as it seemed like he was trying to position himself as the ringleader for any and all future airline-related lawsuits. “Are we going to continue being treated like cattle?” he actually asked without a hint of irony. It was the litigatory equivalent of passing out torches and pitchforks, hoping to get a mob to charge the tarmac with him — or at least book a consultation with his office.

That’s not to say that people wouldn’t be well served by Demetrio. A partner at the Chicago firm Corboy & Demetrio, he’s renowned for his litigation skills, with plenty of experience when it comes to air travel, particularly plane crashes. According to his bio, Demetrio was named one of the National Law Journal’s 50 “Trailblazers and Pioneers” in litigation in 2014, and has often been recognized as one of the top trial lawyers in the state of Illinois.

Dao himself wasn’t there, as Demetrio said he was recovering from his injuries after suffering a concussion, a broken nose, and lost two front teeth. His daughter was present, and thanked everyone for their support. Dao was said to have been released from the hospital on Wednesday, but will still undergo reconstructive surgery. According to Demetrio, Dao, an immigrant, said that his experience was worse than what he went through leaving Vietnam many years ago. Between Demetrio’s expertise and the nature of Dao’s experience, I certainly like their chances if they move forward with a lawsuit.

Yet, despite Dao’s terrible ordeal — and it was terrible — Demetrio didn’t seem to talk about him nearly as much as I would have expected, and didn’t seem all that upset about it. He spent most of the time charming the reporters, smiling and chatting as if he wasn’t there to discuss a traumatizing attack against an innocent person, with the victim’s daughter sitting right there.

Instead of focusing on Dao, Demetrio talked about this supposed greater problem and overall culture of disrespect in the air travel industry. And as someone who has traveled quite a bit in my life, it just didn’t ring true to me. Sure, it’s a pain to go to the airport hours early, shuffle through inconvenient and poorly conceived security measures, and sit in uncomfortable seats, but I never feel like the airlines themselves are disrespecting me personally. The whole narrative that Demetrio was pushing, claiming that he’s heard “hundreds of tales of woe,” was a little weird.

Also weird was how Demetrio couldn’t seem to make up his mind regarding the apology offered by United CEO Oscar Munoz. Early in the press conference, he called the apology “staged,” but later on he said he was grateful for the apology and accepted it.

Now, given that Demetrio filed a petition in state court yesterday, I assumed that he would spend most of the presser talking about his allegations and plans for a lawsuit, but that’s not what happened. When it came to legal action, Demetrio played it coy from the beginning, saying, “Will there be a lawsuit? Yeah probably.” Much, much later on, he said he’s not suing now because he’s not ready, because he’s gathering information like airline policies and procedures, so that any lawsuit will have more substance to it. That information could certainly help his case at trial, but as far as filing a complaint, he could always start with how his client was thrown screaming from an airplane after paying for his seat, with security allegedly breaking his nose and giving him a concussion. My guess? He’s hoping to get his name and his crusade against airlines out into the public, hoping for more clients to join a potential class action. The more people involved, the bigger the settlement, and the more he gets paid.

Towards the end of Thursday’s  conference, Demetrio practically acknowledged this. When asked if he thinks Dao’s case was an isolated incident or indicative of an overall problem in the airline industry, he said “Clearly, I have learned enough from people out there … that there is a culture of disrespect, of rudeness.” He eventually came right out and said, “I hope he becomes a poster child for all of us!”

I’ll bet he does.