Donald Trump and His Cabinet Could be Impeached for Attacking Syria 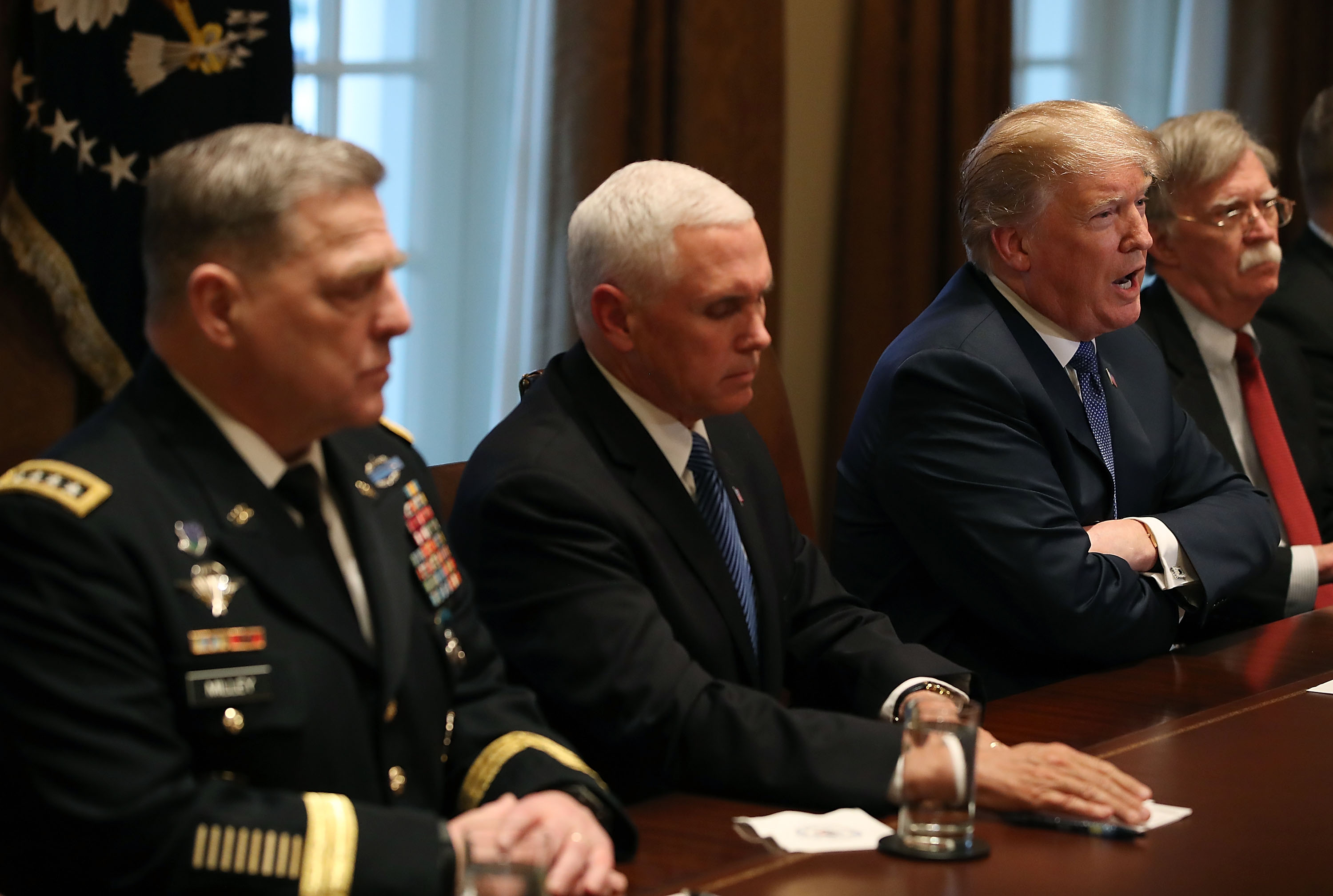 Donald Trump launched an illegal war of aggression against the Syrian Arab Republic. The U.S. Congress would be acting well within its power by impeaching President Trump, Vice-President Mike Pence and every other member of Trump’s cabinet who signed off on the illicit attack.

Constitutional law is quite clear on this point. Article I, Section 8, Clause 11 of the U.S. Constitution grants Congress alone the power to declare war. Often referred to as the War Powers Clause, this section reads:

[The Congress shall have Power…] To declare War, grant Letters of Marque and Reprisal, and make Rules concerning Captures on Land and Water;

Friday night, the U.S. government–along with NATO allies France and the United Kingdom–fired in excess of 100 bombs and missiles at sites alleged to have been valid Syrian military targets. These attacks qualify as hostile uses of force and they are undeniably acts of war.

Trump’s acts of war in Syria were plainly not authorized by the U.S. Congress–a constitutional mandate. Nor was Congress consulted to provide a clear understanding of Trump’s aims in attacking Syria–an additional qualification mandated by U.S. Constitutional law.

But not for lack of trying–by some members of Congress, at least. Hours before the extensive bombing campaign took place, Representatives Justin Amash (R-MI), Barbara Lee (D-CA), Thomas Massie (R-KY) and Zoe Lofgren (D-CA) sent a letter to President Trump demanding that his administration seek and receive congressional approval before taking military action. Eighty-seven members of Congress ultimately signed on to that document.

The Trump administration ignored the bi-partisan letter and acted in defiance of the nation’s founding document. This is quite clear and not subject to debate. As the American Civil Liberties Union once noted, “This fundamental principle of separation of powers lies at the core of the Constitution and is the foundation of our democratic form of government.”

Critics may argue there is some leeway for Trump to act without approval for 60-90 days due to the War Powers Resolution. This is an inaccurate position–though unfortunately common. Codified at 50 U.S.C. §1541(c) Presidential executive power as Commander-in-Chief, limitation, this section of the statute reads, in full:

The constitutional powers of the President as Commander-in-Chief to introduce United States Armed Forces into hostilities, or into situations where imminent involvement in hostilities is clearly indicated by the circumstances, are exercised only pursuant to (1) a declaration of war, (2) specific statutory authorization, or (3) a national emergency created by attack upon the United States, its territories or possessions, or its armed forces.

The War Powers Resolution is a superfluous act of Congress. As Amash noted on Twitter earlier this week, “The War Powers Resolution does not confer any new authority on the president to take offensive military action without congressional approval (nor could it). It instead checks the president when he enters our Armed Forces into hostilities for constitutionally permissible reasons.”

Because the attack on Syria was not a defensive act, the underlying action was not constitutional. Thus, the 60-day timeline–codified at 50 U.S.C. §1544(b)–and frequently cited to by war supporters is immaterial here. If the underlying military action is unconstitutional, the War Powers Act cannot possibly act as a legal salve. This is essentially the same argument Barack Obama made when he illegally bombed and destroyed Libya in 2011. Obama was wrong then. Trump is wrong now.

(And it should be noted that Obama’s war against Libya–urged on by Hillary Clinton–was, in the end, much more destructive than Trump’s Syria strikes are likely to be–but just as illegal. Libya was a crime that went unpunished. But past cowardice and cynicism is no excuse for continued fecklessness in the face of lawlessness now. Past mistakes can and should be learned from.)

The U.N. Charter’s Article 2(4) prohibits the use of force by one state in the territory of another state unless: (1) authorized by the Security Council; or (2) directly in response to a sudden attack. The U.N. Charter is a binding treaty obligation for the United States, so these provisions have the full force of law. Because there was no authorization from the Security Council and because the United States was not acting in self-defense, neither condition was satisfied before Friday night’s attack on the sovereignty of Syria.

The Nuremberg Judgment forms the basis for customary international law post-World War II. That judgment pointedly noted, “War is essentially an evil thing. Its consequences are not confined to the belligerent states alone, but affect the whole world. To initiate a war of aggression, therefore, is not only an international crime; it is the supreme international crime differing only from other war crimes in that it contains within itself the accumulated evil of the whole.”

Russia, Iran, China–and many other countries–were quick to condemn the joint and obvious violation of international law by France, the United Kingdom and the United States. Despite some dubious moral authority on the subject, their legal judgments are correct. The U.S., France and the United Kingdom are now effectively pariah nations who have committed the “supreme” crime at Nuremberg in addition to obvious, willful violations of their international obligations under the U.N. Charter.

The world outside the United States understands a crime has been committed. Of course this is hardly fresh territory for America’s credibility. But the U.S. could try something new: the criminals could actually be punished.

Abject refusal to abide by the U.S. Constitution on matters of war might suggest a response consummate to the crimes committed. Keep in mind this military action was doubly illegal due to the international component. One proper and proportionate response here would be impeachment.

The U.S. Congress could easily assert its long-dormant authority and remove the president as well as his happy clique of potential war criminals and Fox News aficionados. The U.S. Constitution is succinct on this point:

The President, Vice President, and all civil Officers of the United States shall be removed from Office on Impeachment for, and conviction of, Treason, Bribery, or other High Crimes and Misdemeanors.

To be clear: impeachment is not a strictly legal process–nor a strictly political one. Impeachment is a function of constitutional powers and prerogatives assigned to Congress. This process has, in the past, used the appearance of court-like procedures for efficiency’s sake and public understanding.

President Bill Clinton was impeached for perjury committed within the context of sexual impropriety and an ensuing cover-up. The term “perjury” sounds like law. But the underlying consideration there was clearly political. The entire process necessarily occurred in the House of Representatives but only occurred due to the GOP’s revulsion at Clinton and desire to harm him politically.

The political calculus/context of Clinton’s crimes leading to his impeachment was much less egregious than the calculus here: Trump’s knowing and willful violation of U.S. law and constitutional precepts to wage aggressive war. If the present or next Congress has half the courage of the 1998 impeachment class, this will be an easy call. Trump’s high crimes are much more akin to the type of behavior the founders likely sought to proscribe than Clinton’s sexual perfidy.

Reflexive red-hat brigate, neoconservative nation-builders and “humanitarian interventionist” liberals will likely balk at the severity of the crime committed against Syria, the international order and the U.S. Constitution on Friday night. Some will deny the crime entirely. Others will admit the basic crime while seeking refuge in feigned necessity.

These are extreme and dangerous opinions. They carry much water and some weight in the media. But they are legally meaningless and ultimately politically fragile.

Congressmembers who have professed their opposition to Trump’s agenda have been gifted a challenging opportunity. But submitting articles of impeachment–or voting for those likely to be filed in the near future–won’t be nearly as exhausting as fundraising or campaigning.

Impeachment would be a worthy course corrective and is entirely proper under the circumstances. For better or for worse, at least we’ll get to see what #NeverTrump Republicans, constitutional conservatives, and #Resistance Democrats really believe in. Hopefully more than Donald Trump.