Court Ruling All But Snuffs Feds’ War on Pot 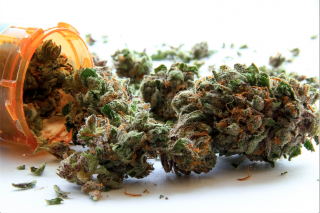 Although Wednesday’s 9th Circuit Court of Appeals ruling in United States v. McIntosh says the federal government can no longer prosecute medical marijuana suppliers and other individuals who are in full compliance with state medical marijuana laws, it leaves some areas where the feds can still be buzzkills.

“Congress could restore funding tomorrow, a year from now, or four years from now,” he wrote, “and the government could then prosecute individuals who committed offenses while the government lacked funding.”

The consolidated appeal at issue in McIntosh arises from criminal prosecutions in three different federal districts involving 10 different cases and 14 defendants. Two of the cases arose from activity in California, and one arose from activity in Washington. All three cases involved defendants operating without a permit “per se,” and engaging in activities that, while pushing the boundaries of state law, were arguably within each state’s medical marijuana laws.

The core issue at the heart of the court’s decision was the interpretation of language contained in a spending rider for the 2014 and 2015 Appropriations Bills. The language of the rider stated that the Department of Justice (DOJ) was prohibited from using funds allocated to them to interfere with State implementation of medical marijuana laws.

Because this language was unclear and imprecise, the court had to interpret what it meant for the DOJ to “prevent” states from “implementing” their medical marijuana laws. And, specifically, the court had to determine whether prosecuting someone under the Controlled Substances Act (CSA) for conduct allowed under state law prevented that particular state from implementing its medical marijuana laws.

The DOJ argued that the language contained in the rider applied only to prosecution of state actors, such as licensing clerks, and did not apply to individual actors in the medical marijuana industry. Rejecting the DOJ’s narrow interpretation of the rider language, the court concluded that if the DOJ punishes individuals for engaging in activities permitted under state law (such as the use, cultivation, distribution and possession of medical marijuana), then the DOJ is preventing state law from being implemented as a practical matter.

The 9th Circuit’s ruling provided some clarity for state regulation of the medical marijuana industry. However, unanswered questions persist. While the court chose to interpret language in the rider to a certain extent, other clauses remain ambiguous.

For example, the operative holding of the court is that the DOJ cannot prosecute what the state “permits,” but what does the state permit? Further, what does “strict compliance” with what is permitted by the state mean in this context? These phrases are still open to interpretation, and could be a source of litigation in the future.

More specifically, would a comprehensive licensing scheme ensure licensed actors are in “strict compliance” with what is permitted by the state? Would this automatically insulate licensed actors from federal prosecution? During the timespan in which the underlying cases took place, California did not have a permit program for actors in the medical marijuana industry, making it difficult to determine whether actors would indeed be in strict compliance with state law.

Another lingering question revolves around who bears the burden of proof when it comes to demonstrating whether DOJ prosecution is not precluded by the Appropriations rider.

The court held the defendants were entitled to an evidentiary hearing to determine “whether their conduct was completely authorized by state law, by which we mean that they strictly complied with all relevant conditions imposed by state law on the use, distribution, possession and cultivation of medical marijuana.” Yet, the Court did not address the standard for the burden of proof and who bears that burden.

If past federal litigation is any indication, in future litigation, the government will likely have to carry the burden, as it would involve the question of whether the DOJ is acting with proper authorization to move forward with prosecution, which ultimately is a question of constitutionality. The DOJ is in the best position to answer questions regarding the constitutionality of its actions, and thus will likely have to bear the burden going forward.

Michael Chernis of the Chernis Law Group of Santa Monica, Calif. specializes in medical marijuana cases and has been a criminal defense attorney and commercial litigator for nearly 20 years. He is licensed to practice law in both California and New York, as well as several federal courts in those jurisdictions.