‘It Is Wrong’: Juror Calls Out Fellow Juror During College Murder Trial Deliberations

A question from one juror to the judge in the Steven Jones murder trial results in the calling out of a fellow juror.
Twitter share button 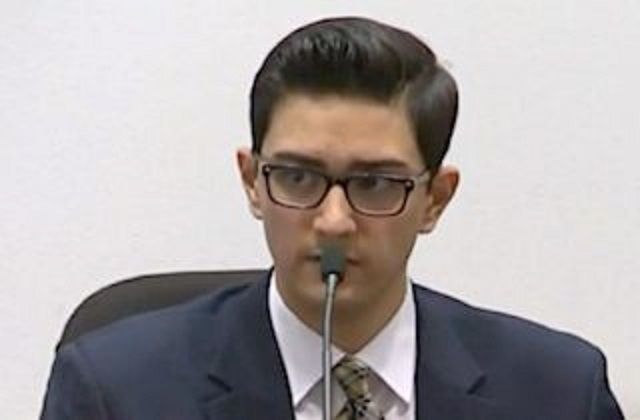 “Mr. Barker said in his closing statement that Collin [sic] Brough had the right to charge Steven Jones, once he had the light shined in his eyes. I never heard that during the testimoney [sic]. One juror is holding onto that . . . I think it is wrong.”

The ellipses appear in the original. The note was sent from “Juror 2” to the judge on Friday, April 28.

The judge responded as follows:

“What the lawyers said in opening statements and closing arguments is not evidence. When I say evidence, I mean only the testimony and exhibits admitted during this trial. You are to rely on your own memory of the evidence.”

According to documents on file relating to the case, the judge appears to have made no attempt to read back the prosecutor’s closing argument or to otherwise clear up the confusion. The upshot of the question, however, is clear: at least one juror is not happy with at least one other juror.

The juror who sent the note is one of twelve considering the fate of Steven Jones. Jones faces first-degree murder, aggravated assault, and a series of lesser charges over the shooting of four fellow students near the Northern Arizona University campus in October 2015. Colin Brough died in the attack. Nick Piring, Nick Prato, and Kyle Zientek were injured. Jones admitted to being the shooter, but he claims the shots were fired in self-defense. Jones, who took the stand in his own defense, testified that he feared for his life after a group of drunken fraternity members confronted him. Everyone else who testified about the altercation felt that their lives were not in danger.

The above question was one of several sent to the judge on Friday.

QUESTION: “Could we go to the crime scene?”
RESPONSE: “For logistical reasons the Court cannot grant this request.”

QUESTION: “What are the two exact statements Steven Jones said in the police car?”
RESPONSE: “The two statements made by Mr. Jones in the back of the patrol car were: 1. ‘Why were they trying to hurt me?’ 2. ‘I thought I was going to die.'”

QUESTION: “Does a non-contact motion directed toward someone legally justify self defense if it is believed the action was aggressive?”
RESPONSE: “You are to rely on the instructions, your wisdom, common sense and experience to answer this question.”

QUESTION: “Define ‘adequate time’ for a cooling off period.”
RESPONSE: “You are to rely on the instructions, your wisdom, common sense and experience to answer this question.”

QUESTION: “What does the law state reguarding [sic] point [sic] a gun at an unarmed person? Is a threat? Is it an assault? Is it a crime?”
RESPONSE: “You are to rely on the instructions, your wisdom, common sense and experience to answer this question.”

QUESTION: “Is an unarmed person charging at someone with a gun considered a self defense?”
RESPONSE: “You are to rely on the instructions, your wisdom, common sense and experience to answer this question.”

What the jury meant by a “non-contact motion” is unclear, though it’s possible the jury was referencing testimony which suggested victim Colin Brough was moving toward the defendant at the time the first shots were fired at Brough.

The final two questions are perplexing at best.

The judge and the attorneys struggled to answer some of these questions. The defense renewed an attempt to seek a jury instruction regarding the defensive display of a weapon. The judge almost allowed such an instruction, but the defense only wanted part of the instruction read to the jury. The judge ultimately decided against it.

The judge ruled against a defense motion for a mistrial in the middle of jury deliberations. The defense objected to the prosecutor’s closing argument. The prosecution argued that under Arizona criminal procedure rule, motions for a mistrial may only be decided after a jury verdict has been rendered.