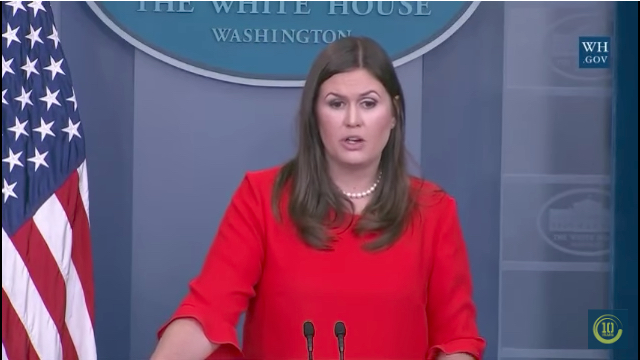 Whitehouse claimed that Sanders’ recent comments disparaging former FBI Director James Comey were more or less akin to witness tampering. He even cited a statute to bolster his sensational claim.

The Hashtag Resistance immediately seized upon Whitehouse’s claim in an attempt to score some cheap points and gin up outrage, but, predictably, Eric Boehlert, didn’t focus on the statute in question in a post at the Hillary Clinton dead-enders site, ShareBlue. So, let’s take a look at the law cited by Whitehouse and see if we can make any legal sense out of his accusations. (Spoilers: we can’t.)

There’s a statute, 1504 in the obstruction of justice statutes, that talks about attempts to influence grand jurors. So the question for Sarah Huckabee Sanders is, “Who asked you to do that? Who told you to do that?”

This is an apparent reference to 18 U.S.C. §1504, which is codified under the title: “Influencing a juror by writing.” That statute reads, in full:

Whoever attempts to influence the action or decision of any grand or petit juror of any court of the United States upon any issue or matter pending before such juror, or before the jury of which he is a member, or pertaining to his duties, by writing or sending to him any written communication, in relation to such issue or matter, shall be fined under this title or imprisoned not more than six months, or both.

The above law doesn’t need an awful lot of unpacking to understand why Whitehouse was nowhere near correct in his estimation of Sanders’ potential legal liability for mentioning James Comey, but we’ll humor the current senator and former attorney general and U.S. attorney for Rhode Island. Here goes:

First of all, there’s the title of the statute, which typically shouldn’t be relied upon for much guidance, but in this case gives an immediate clue as to the legal feasibility of Whitehouse’s claim. There was no writing and Sanders did not attempt to influence a juror with her non-existent writing. As anyone willing to inspect the record can note, Sanders’ comments about Comey were given at a press conference–they were spoken. Self-evidently, there was no writing that occurred here.

One arguable counterpoint is that maybe Sanders’ words were written somewhere before she spoke them and therefore a writing did, in fact, occur. This argument wouldn’t stand up to much scrutiny, however, because the legal import of the above statute is that the writing itself is made available to the juror(s) in question. But sure, there is the off-chance that Sanders’ likely-off-the-cuff commentary was written somewhere before the words came out of her mouth. Still, that pedantic squabbling would miss the spirit and letter of the law entirely.

Second, there’s the very basic issue of whether Sanders was trying to influence a juror–or juror(s)–in the first place. During her disparagement of Comey’s record, possible lawbreaking and reliability, Sanders never once singled out Robert Mueller‘s grand jury members. Now, of course she clearly wouldn’t do so, but there is a need to show that Sanders was trying to influence those grand jurors if Whitehouse’s charges have any chances of sticking. Because this burden is extremely high and nearly impossible to meet without some explicit showing of intent to influence said jurors, it’s unlikely her comments would satisfy the basic thrust of the statute here.

Finally, the statute itself contains fairly clear language that is entirely damning to Whitehouse’s claim. The fourth clause explains that someone is guilty of the crime of obstruction viz. influencing a juror by writing only…wait for it…”by writing or sending to him any written communication.” Again, there was no written communication to begin with. And, unless the entire political press and Robert Mueller’s legion of lawyers have missed quite a story, Sanders did not supply those empaneled (and mostly anonymous) grand jurors with any sort of written communication. Now, it is plausible that someone in Trump’s orbit would take characteristically ill-advised action like sending a packet of anti-Comey press clippings to grand jurors, but this scenario is best described as realistic political fiction and wouldn’t implicate Sanders in any event.

TL;DR–Sorry you had to read all of that. Whitehouse’s claim was as incendiary as it was baseless. The senator’s comments reflect a remarkable ignorance of what the law says and how it operates–or, rather, an exceedingly cynical attempt to present the statute mentioned as something it quite obviously is not. But the best cure for absurd political slop-tossing is the harsh light of how things actually work.