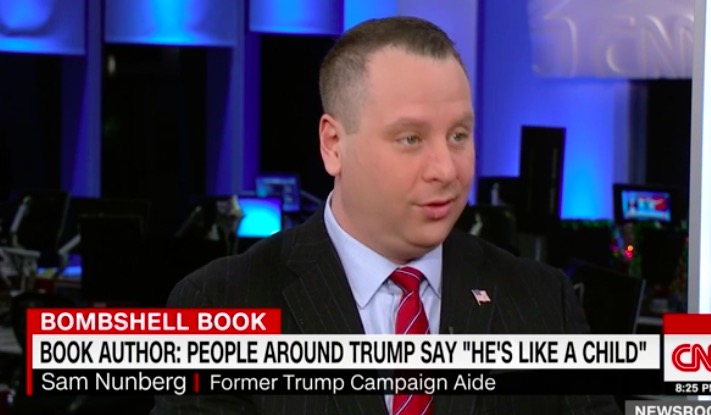 Sam Nunberg, a former and early aide to President Donald Trump‘s 2016 presidential campaign has been subpoenaed to testify and produce documents by special counsel Robert Mueller–but he says he won’t do it. In fact, he said “screw that.”

Because of the peculiar nature of grand juries, there’s not much Mueller can legally do about it.

According to multiple reports, Nunberg plans to refuse Mueller’s subpoena request by not showing up or turning over any of the requested documents. Mueller is specifically requesting “documents related to President Trump and nine other people, including emails, correspondence, invoices, telephone logs, calendars and ‘records of any kind’.”

The Russians and Trump did not collude. Putin is too smart to collude with Donald Trump. I’m not spending 80 hours going over my emails with Roger Stone and Steve Bannon and producing them. Donald Trump won this election on his own. He campaigned his ass off. And there is nobody who hates him more than me.

So, what legal consequences does Nunberg stand to suffer if he doesn’t fully comply with Mueller’s request? Perhaps surprisingly, not very much.

The rules governing federal grand juries are contained in Rule 6 of the Federal Rules of Criminal Procedure. The only section of those rules dealing with violations of grand jury requests is contained at §6(e)(7) and reads:

Contempt. A knowing violation of Rule 6, or of any guidelines jointly issued by the Attorney General and the Director of National Intelligence under Rule 6, may be punished as a contempt of court.

The general consensus regarding the contempt provision–at least that echoed by most defense attorneys–is that ignoring a federal grand jury subpoena is something intelligent and innocent people simply do not do. But that’s not a position strictly motivated by selflessness on behalf of the credentialed and barred counselors among us.

Most lawyers will instruct their clients that ignoring a grand jury request is a very dangerous decision. Most likely, the prosecutor putatively acting on the grand jury’s behalf will respond to an ignored subpoena request by asking a court to hold the person in civil contempt for refusing to comply. If granted, this turns the subpoena-ignoring party into a “contemnor.”

The most likely result of a civil contempt holding is that the court will then order the contemnor to be thrown in jail until they comply with the subpoena or until the grand jury’s term ends–whichever happens first. There are certain exceptions to this time-honored state of affairs but they’re probably not particularly relevant here.

Notice, however, that this state of affairs is described as “time-honored” and not statutorily-based. That’s because the general response to people who ignore grand jury subpoenas–throwing them in jail until they comply–isn’t actually a settled matter of law. Advisory Committee Notes on the 2002 Amendment to Rule 6 state, in part:

Parsing the above legalese leaves us with this upshot: the contempt sanction was originally intended only to be available as a punishment for someone who doesn’t comply with certain “secrecy prohibitions” but the Supreme Court has issued non-authoritative guidance (known as “dicta”) that the contempt punishment could apply to other situations–though not even the situation that has arisen here with Nunberg’s basic and loud defiance.

Of course, Nunberg could compromise with Mueller by simply appearing and citing his Fifth Amendment right against self-incrimination (which might or might not be challenged) but Nunberg is likely of the opinion that even this is too much to ask–and the media would almost certainly point out that pleading the Fifth makes him look guilty. Law&Crime reached out to Nunberg for comment on this exact avenue, but no response was forthcoming at the time of publication.

Let’s be clear about what would be happening here: if he chose to pursue it, Mueller can only rely on a pained and controversial interpretation of a federal rule to imprison Nunberg with the hope of coercing him into compliance. Recall, this federal rule is actually silent on the issue itself and the Supreme Court has never been asked to interpret the contempt provision in its entirety.

In other words: if Nunberg is thrown in jail, he would not technically be considered punished by his jail time because he didn’t break a law.

Nunberg’s imprisonment would only occur by a system that controversially allows prosecutors and judges to force compliance with the legal system. In any event, Nunberg can’t be jailed for any longer than 18 months. This aspect of the grand jury’s peculiar non-punishment-imprisonment tradition is settled.

But it may not even come to that. Numerous anarchists and leftists have fought grand jury subpoenas in the past–and eventually won. In fact, Katie Yow‘s ongoing case deals directly with the issue of grand jury resistance.

Jerry Koch resisted a grand jury subpoena in 2013 and was held in federal custody for 241 days before a judge was forced to admit there was no legal reason to hold him. Koch’s silence put him in prison and it got him out.

Steve Martinez ignored a similar subpoena issued by a prosecutor on behalf of a grand jury in North Dakota allegedly investigating an incident during the Standing Rock protests in early 2017. Martinez beat it, too.

In sum, prosecutors can be very aggressive with the way they interpret their authority under the federal rules. Judges tend to allow this–until someone actually fights back and calls on the law to reign in prosecutorial abuse.

When faced with the dual facts of: (1) a non-complying/silent witness and; (2) the purely punitive nature of imprisonment rising from a civil contempt holding, judges can be forced to compel someone’s release. But that generally occurs after the person has already spent time behind bars.

TL;DR–Mueller can and probably will throw Nunberg in jail if he so desires. But again: this isn’t because Nunberg is being punished–it’s because Mueller wants to force compliance that courts are keen on stretching the law to force such compliance. Nunberg could fight Mueller on this and if he does, he may inadvertently create a much-needed clarification in federal grand jury rules and Constitutional rights.