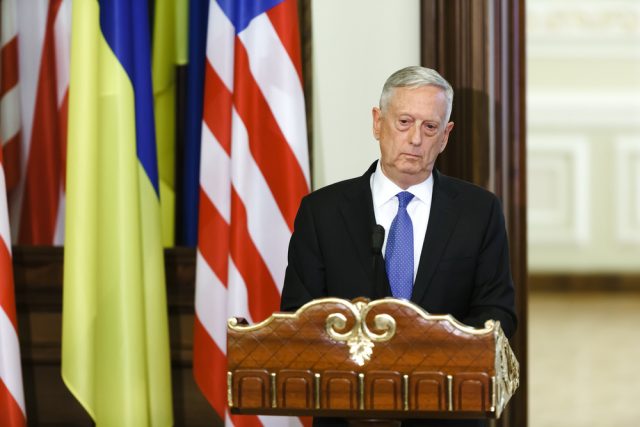 And his PR team is even stronger.

After a statement issued by the secretary of defense regarding the implementation of Trump’s transgender military service ban, mainstream media outlets went into full-on adulatory mode and breathlessly repeated a factually-deficient claim that Mattis was somehow freezing or putting the ban on hold while the Pentagon twiddled its thumbs to conduct a study.

Except that’s not even close to what happened. Like, at all. Rather, Mattis is loyally following Trump’s executive order exactly as written.

Readers may recall that Trump telegraphed his intent to ban transgender service members via a series of Adderall-fueled tweets in late July. The Pentagon doesn’t directly answer to Trump’s Twitter account, however, and the Tweeter-in-Chief was forced to have some eager transphobic subordinate draft up an actual executive order.

That anti-transgender presidential memorandum was issued on August 25 and reads, in relevant part:

Therefore, no freeze. Because the ban hasn’t gone into effect yet.

Shannon Minter, with the National Center for Lesbian Rights, explained, in response to fawning Mattis-freeze coverage: “The new ban does not go into effect until March 23, 2018 and expressly states that no one can be discharged for being transgender in the meantime. There is nothing new at all here, and suggesting otherwise is terribly misleading.”

Thus, Mattis’ press release adds absolutely zilch to the implementation of the transgender ban–except for perhaps a patina of legitimacy to Trump’s red meat politicking at the expense of transgender individuals.

Over at centrist blog, Think Progress, Zack Ford wonders whether the following sentence in Mattis’ press release has journalists tripped up over the non-freeze:

“In the interim, current policy with respect to currently serving members will remain in place.”

Yeah, maybe. Spend a few minutes at any J-school function (social or academic) and you’ll realize most up-and-coming stenographers for the powerful aren’t necessarily in possession of the sharpest minds in the country. So, sure, it’s entirely possible that the people writing all those inaccurate stories just flubbed this one beyond all recognition.

But spend a bit more time around some journalists and you’ll understand their desire for keeping the powerful and privileged happy–or at least accessible–runs thicker than ink. That’s the more likely explanation here. After some pro forma introductory language, the first paragraph of Mattis’ press release reads:

The department will carry out the president’s policy direction, in consultation with the Department of Homeland Security.  As directed, we will develop a study and implementation plan, which will contain the steps that will promote military readiness, lethality, and unit cohesion, with due regard for budgetary constraints and consistent with applicable law.

That’s a bunch of intelligent-sounding bigotry posing as an earnest scientific enterprise. It ignores how such a study was already undertaken–the results of which are what led to Obama ending the transgender ban in the first place.

The rest is pretty straightforward; Mattis, the good soldier, is doing exactly what Trump has ordered him to do. No more, no less. And, again, maybe practically every journalist who reported on Mattis’ statement simply failed to read Trump’s actual executive order. Journalists can be lazy, too, of course. But it’s more likely something else here is at work.

Ever implicit in the coverage of Mattis is the notion that the storied general is somehow a savior on the inside of the Trump administration. Coverage of the non-freeze has been framed as some sort of attempt by Mattis to subtly insubordinate his way into the #Resistance Hall of Fame. And none of this is new.

Legacy media stalwart Newsweek has openly pined for Mattis to stage a coup d’etat against Trump. Even putatively left-wing (and billionaire-funded) The Intercept has fallen prey to the cult of Mattis–Ryan Grim wrote a nonsensical puff piece about the general’s predilection for using the word “pussy” metaphorically.

Such a tendency to read noble intentions into banal administrative actions is endemic within certain folks terrified by Trump’s presidency. Searching for small slivers of hope against the maelstrom of this administration’s cruelty makes sense. In the end, though, lionizing Trump’s apparatchiks is likely to lead to heartbreak after heartbreak.

Mad Dog Mattis won’t save you, liberals, he’ll only let you down.