Fmr White House Lawyer: Trump Tweet Against Papadopoulos May Be Obstruction of Justice 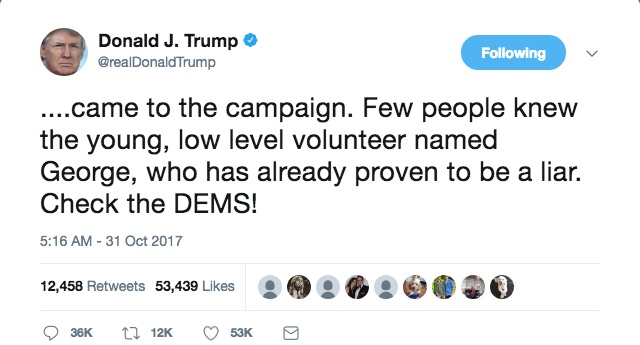 President Donald Trump has been accused of obstructing justice by a former White House ethics attorney. There are multiple arguments for that charge undergirded by multiple statutes. In the interest of brevity, we’ll explore just one here.

Norman Eisen served as chief ethics lawyer for the Obama administration. Today he outlined the possibility of an obstruction charge in an op-ed discussing the president’s tweet-storm in response to the guilty plea by former campaign adviser George Papadopoulos.

It’s not worth re-hashing the entirety of the Papadopoulos story here, but suffice to say, what the public knows is: Papadopoulos lied to the FBI on numerous occasions regarding the Trump campaign’s Russian contacts, got caught lying about his involvement with those contacts, and has now reached a plea agreement with special counsel Robert Mueller.

Trump’s response to this news came via Twitter, natch. He wrote:

The Fake News is working overtime. As Paul Manaforts lawyer said, there was “no collusion” and events mentioned took place long before he came to the campaign. Few people knew the young, low level volunteer named George, who has already proven to be a liar. Check the DEMS!

Whatever other bad things happened for Trump on Monday, at least the revelations hadn’t wiggled the obstruction needle — until Tuesday morning, when Trump attacked Mueller’s cooperating witness. Take it from me as someone who for a quarter of a century worked against and with prosecutors and FBI agents (including Mueller himself): they are fiercely protective of their cooperators. By attacking Papadopoulos as a liar, Trump hardly signals his good faith to Mueller. After all, Mueller is offering Papadopoulos’s testimony as true. So Trump is not just assaulting the special counsel’s cooperator; Trump is contradicting Mueller, and maybe even hinting that Mueller is intentionally offering the testimony of a liar.

Eisen appears to be arguing that Trump’s tweet referencing Papadopoulos rises to the level of witness tampering. There are multiple statutes that deal with witness tampering in the federal laws outlining obstruction of justice.

The law on point here is mostly contained at 18 U.S.C. 1512.  Under the subsection of tampering by harassment, the law reads, in part:

Whoever intentionally harasses another person and thereby hinders, delays, prevents, or dissuades any person from—
(1) attending or testifying in an official proceeding;
(2) reporting to a law enforcement officer or judge of the United States the commission or possible commission of a Federal offense or a violation of conditions of probation 1 supervised release,  parole, or release pending judicial proceedings;
(3) arresting or seeking the arrest of another person in connection with a Federal offense; or
(4) causing a criminal prosecution, or a parole or probation revocation proceeding, to be sought or instituted, or assisting in such prosecution or proceeding;
or attempts to do so, shall be fined under this title or imprisoned not more than 3 years, or both.

Here, Trump’s intent would be easy to show. He sent the tweets in question. They were aimed at Mueller’s witness–Papadopoulos. There’s no argument or even much discussion necessary.

Calling Papadopoulos “a liar” would possibly be enough to constitute harassment on its own. The fact that Trump, putatively the most powerful the leader of the free world, referred to Papadopoulos as a liar via his massive public platform adds some important information here. The publication of such an accusation to millions of people all at once is perhaps not something the statute’s drafters had in mind when the law was written, but times change and the law has to account for that. It’s almost certainly on Mueller’s mind–and prosecutors are typically some of the more creative and flexible lawyers on the planet.

Therefore, Eisen’s following argument carries some weight. He writes, “Think about it: When you are a witness in a case that threatens the most powerful man in the world, and he attacks you publicly, that is scary.”

As for the section of the statute whereby the harassment “hinders, delays, prevents, or dissuades,” Mueller could also have a bit of a  field day if he so chose. But a lot of it–indeed the rest of it–depends quite a bit on Papadopoulos.

Has Trump’s tweet had any impact on what Papadopoulos is willing to say? When he might have said it? What if Trump’s tweet made Papadopoulos simply doubt himself–and the way he remembered events unfolding? The law is unforgiving in the right hands, and if Papadopoulos were to go on record that Trump’s words gave him pause–even the slightest–then Mueller could feasibly take that Trump-produced trepidation and run with it.

The problem here is that this sort of charge would be a thin reed to stand on by itself. The nature of this law relies so much upon the narratives at play, so it would be important to Mueller to have a strong narrative. Obstruction by witness tampering here would necessarily be a battle of testimony rather than documentation alone. And these sorts of things can be difficult to measure. Mueller would want to be exceedingly careful and probably wouldn’t throw the book at President Trump just because he could.

Of course, all of this is predicated on the assumption that what Trump tweeted about Papadopoulos actually had a negative impact on the investigation itself generally and what Papadopoulos might have been willing to share–or when and how he would have been willing to share it with Mueller. But if Papadopoulos just laughed off the tweets then there’s probably no harm so there’s probably no foul. That should be obvious, but it’s worth putting down for the record.

Now, Eisen also offered a tangential argument about Trump not wanting to upset Mueller. That’s probably good advice, but it’s not strictly a legal argument and therefore it’s not particularly worth exploring. And Mueller’s general opinion of Trump is mostly immaterial here–if anything, due to the enormous pressure of putting forth a clean slate of charges.

However, if Trump’s tweetstorm did, as Eisen says, move the needle even a little into the realm of influencing any witness–including and beyond Papadopoulos–to the investigation’s frustration, then Mueller might be a little more inclined to get creative with the law. That would spell trouble with a capital “T” for President Trump.