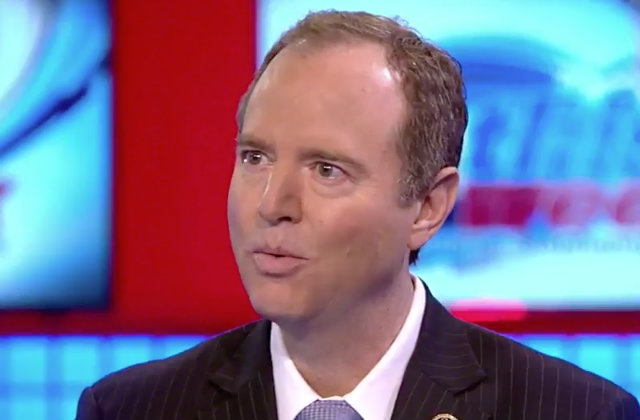 Representative Adam Schiff (D-CA) appears to be openly disclosing classified information to the news media–after weeks of complaining about Republican plans to disclose such information.

Per a report by CNN on Saturday, Schiff, the ranking member on the House Permanent Select Committee on Intelligence (“HPSCI”) told multiple reporters on Friday that the central claim of the Nunes surveillance memo was “unfounded.”

The Nunes surveillance memo relies upon the following thesis: that FBI and DOJ officials within the Obama administration made substantial and material omissions–rising to the level of perhaps unlawful misrepresentations–in front of a Foreign Intelligence Surveillance Court (“FISA Court”) in order to obtain a surveillance warrant on Donald Trump‘s former campaign volunteer, Carter Page. The memo itself spells out those alleged omissions and reads, in part:

Neither the initial [FISA] application in October 2016, nor any of the renewals, disclose or reference the role of the DNC, Clinton campaign, or any party/campaign in funding Steele’s efforts, even though the political origins of the Steele dossier were then known to senior and FBI officials.

But after the controversial memo was released on Friday, Schiff took multiple reporters by the hand and offered his insight into those allegations against high-level officials within the Department of Justice (“DOJ”) and the Federal Bureau of Investigation (“FBI”) by dismissing them in whole.

Those insights cut to the heart of the Nunes memo’s claims. Namely, Schiff noted, via both a press release and comments to reporters, that the memo’s claims regarding Christopher Steele‘s political motivations were “not accurate.” Schiff’s press release reads, in part:

In comments to reporters, Schiff later said that Steele’s “likely political motivation” was made aware to the FISA Court–again, a direct contradiction of the Nunes surveillance memo’s allegations.

But in the performance of Schiff’s schtick–protecting the nation’s largely unaccountable intelligence agencies from any sort of oversight–Schiff may have released classified information himself.

Now, the initial press release, on its own, likely isn’t enough to rise to the level of releasing classified information. Schiff’s lengthy rebuttal more or less just says that Devin Nunes’ memo is wrong and is light on details. But his later comments to reporters–where he told reporters that Steele’s “likely political motivation” was revealed to the FISA Court–do appear to reveal distinct information, potentially classified information.

Recall: the Nunes memo was only released after President Donald Trump declassified the much-ballyhooed document. What Trump did not do, however, was de-classify the underlying FISA warrant application. It would appear that Schiff has revealed information from that underlying application by attempting to discredit the Nunes memo.

As with any controversy involving America’s secret court system–FISA–and classified information, generally, it’s hard to nail this down completely. Attorney Mark Zaid, who has handled multiple cases involving such information said, in comments to the Washington Examiner:

At first blush I would have some concerns about the details in this statement as to whether it crosses a classification line, but it is possible Rep. Schiff, having had access to the underlying classified information, knows these points are in unclassified paragraphs. So much of these back-and-forths about the memo are in a gray area on classification.

Grey is certainly the color of the day. Both for its uncertainty and the overwhelming sense of meh.

Recall again: The Nunes surveillance memo was widely trumpeted before its release by the #MAGA set and many congressional Republicans as damning evidence viz. alleged FISA abuses. Conversely, the FBI, as well as the DOJ and other members of the intelligence community warned the memo’s release would endanger national security. The Democratic Party fully embraced and echoed the concerns of the intelligence community, savaging the memo’s release as “dangerous,” and a violation of House rules–in addition to their Chicken Little-like cries about endangering national security.

In reality, none of the above claims were true. Republicans mislead about the memo’s significance–most of the information is public knowledge. While Democrats, the FBI, DOJ, and others in the intelligence community all-but outright lied as to the alleged dangerousness of the memo’s contents–no one has yet to offer any plausible reason America’s national security was endangered by it.

Democrats are quite loudly preparing their own counter-memo to the Nunes surveillance memo in order to dispute the claims contained in the original, but the tactics employed by some Democrats in attempting to bat down the Nunes memo’s significance are ironically looking like nothing more than a messier, aped version of exactly what Democrats have been accusing the memo’s boosters of doing for so long now: releasing (over) classified information.