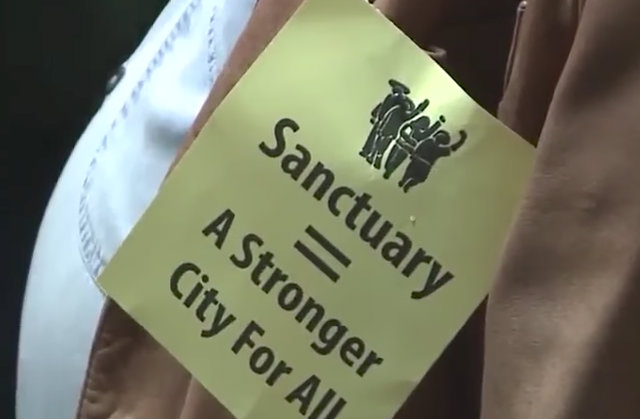 California and more than 300 other jurisdictions are suing over a recent Justice Department threat to pull tens of billions of dollars of federal funding from “sanctuary cities” for allegedly harboring illegal aliens by refusing to honor so-called detainer requests, and otherwise not cooperating – allegedly illegally – with federal efforts to enforce immigration laws.

But this latest attempt by the Justice Department to pressure so-called sanctuary cities to cooperate in immigration enforcement efforts seems to be a largely empty or at least an exaggerated threat, and probably illegal.

Notwithstanding suggestions to the contrary, no federal law requires – nor can federal law constitutionally require – cities to assist the federal government in enforcing immigration law.

Despite many complaints from the administration that sanctuary cities are not honoring detainer requests by ICE, its own report has conceded that such cooperation is not required, and that failure to honor detainer requests cannot provide grounds for withholding federal funds. Thus it has stated:

“Section 1373 does not specifically address restrictions by state or local entities on cooperation with ICE regarding detainers. A legal determination has been made . . . that civil immigration detainers are voluntary requests. The ICE officials with whom we spoke stated that since the detainers are considered to be voluntary, they are not enforceable against jurisdictions which do not comply” [emphasis added].

Indeed, the only requirement federal law imposes, under 8 U.S.C. 1373, is that state and local officials not prohibit or restrict employees from providing “information regarding citizenship or immigration status.”

But since sanctuary cities usually simply have police never question people about their status, officials would have no citizenship and/or immigrant status information available to share which would be restricted, so there would be no violation, and the threat appears to be largely an empty one.

In any event, the entire program, beginning with President Trump’s executive order stating that funds should be cut off to so-called sanctuary cities – if it is interpreted as many believe – may be an unconstitutional violation of both states’ rights and Congress’ rights.

If, as some fear, the order would threaten funding for cities which claim sanctuary status because they tell police not to question people about their immigration status, and don’t honor detainer requests to hold people in jail for immigration purposes, it may be unconstitutional on several grounds.

This principle dates back at least to a 1842 Supreme Court decision striking down a requirement that states assist federal officials to capture runaway slaves.

It was also reinvigorated in a 2012 ruling that states could not be required to expand Medicaid programs under threat of a loss of federal funds – the same coercive method employed in Trump’s order – except where the threat was one mandated by Congress and signed into law, not a mere presidential order.

Second, the Court has said that conditions may not be imposed on federal grants unless they are “unambiguously” stated in the statute’s text “so that the States can knowingly decide whether or not to accept those funds.” Few if any existing grants have explicit conditions related to providing sanctuary.

Moreover, the conditions, if any, seemingly have to be passed by Congress.

Allowing a president to cut off funds based solely upon his own whims, without any congressional approval, could create a very dangerous precedent undercutting Congress’ own authority (under separation of powers) as well as federalism (upholding states’ rights).

For example, it could permit a Democratic president to force states to do what a Republican dominated House and Senate might oppose, or visa versa.

Moreover, since the order provides for funds to be cut off only to “jurisdictions that willfully refuse to comply with 8 U.S.C. 1373,” it’s not clear if it would even apply to most sanctuary cities since they do not prohibit, much less “willfully prohibit,” employees from providing immigration information.