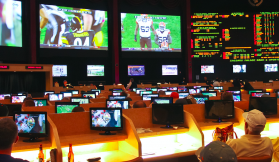 (AP)—The Supreme Court agreed Tuesday to take up New Jersey’s bid to allow sports betting at its casinos and racetracks, a case that could lead other states to seek a share of the lucrative market.

The justices will review a lower court ruling against the state, which is hoping to capture some of the estimated $150 billion that is illegally wagered on sports each year.

New Jersey Gov. Chris Christie and supporters in the state Legislature have tried for years to legalize sports gambling to bolster the state’s casino and horse racing industries. The casino industry, after a period of job losses and closings, has lately been doing better.

New Jersey state Sen. Raymond Lesniak, a Democrat who has led the state’s effort to legalize sports gambling, said a win for the state would give an additional boost to casinos.

“Atlantic City is going to be packed when we win this case,” said Lesniak, who first introduced legislation to overturn the ban in 2009. “Sports betting will lead to people staying for several days, not just playing a few hours and going home. During football season, the NCAA tournament, the World Cup, people will be flocking to Atlantic City to bet on them.”

The case will be argued in the fall. Daniel Wallach, an attorney in Fort Lauderdale, Florida, and an expert in sports law, said the case could lead to a nationwide repeal of the federal sports betting ban.

“This is the day that New Jersey has been waiting for for years,” said Wallach, who has been closely following New Jersey’s legal efforts to overturn the ban.

The court jumped into the case even after the Trump administration urged the justices not to get involved, putting the governor and the president he campaigned for on opposite sides of the issue. President Donald Trump also once owned the Trump Taj Mahal casino in Atlantic City. It closed last October under the ownership of fellow billionaire Carl Icahn, who sold it in March to Hard Rock International. The company plans to reopen the casino under its own brand next year.

Speaking on a sports radio show this month, Christie criticized the federal government for restricting sports betting while simultaneously allowing states to legalize recreational marijuana even though it’s illegal under federal law.

The case has lasted nearly as long as Christie has been in office. New Jersey voters passed a non-binding referendum to allow sports betting in 2011.

The four major pro sports leagues and the NCAA sued the state after Christie signed a sports betting law in 2014.

Legal sports gambling is allowed in Nevada and three other states that already had approved some form of wagering before the federal law went into effect. Nevada is the only state to allow single-game wagering.

Congress gave New Jersey a one-time opportunity to become the fifth state before the ban was enacted, but the state failed to pass a sports betting law in the required time window.

Arizona, Louisiana, Mississippi, West Virginia and Wisconsin had joined New Jersey’s effort to have the case heard by the Supreme Court.

This month, the American Gaming Association announced the creation of a coalition involving organizations of attorneys general and police, policymakers and others to advocate for the repeal of the ban that the industry says has fueled the illegal sports betting market.

The groups cited research that showed legalizing sports betting in the U.S. could support more than 150,000 jobs.

“The Professional and Amateur Sports Protection Act of 1992 has failed to protect sports and fans,” the group said in a statement after the court’s action Tuesday. “PASPA, which is approaching its 25th anniversary, is fueling an unregulated $150 billion illegal gambling market that continues to deprive states of vital public funding for services such as law enforcement and infrastructure.