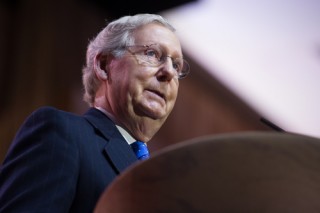 Republicans are wagering that if they stall for the next year, they can get a conservative justice to replace the late Antonin Scalia. If they were smart, they’d make a play now while they still hold the stronger hand.

Senate Majority Leader Mitch McConnell stated that the next President should be the one to appoint Scalia’s successor. He’s taking a big risk by assuming the next President will be a Republican. With a Supreme Court seat up in the air, social issues such as abortion and gay marriage take center stage once again. Have Republicans been sleeping for the past eight years? After the last two elections, you’d think the GOP would realize that the country is drifting left on these matters, and aim to focus on issues such as the economy or foreign policy, where moderates could give them the edge. Their current tactics could backfire big time and cost them not just the White House but control of the Senate as well.

If the Republicans were smart, they would –gasp! – work with President Obama towards a – double gasp! – compromise. The President knows he could never get a liberal justice confirmed by the Senate, but he does not want to risk a Republican President appointing a true heir to the conservative Scalia. At the same time, Republicans should take advantage of the power they currently wield, instead of taking it for granted, because it can vanish in November.

Instead of taking a huge gamble to land the next Scalia, they should use their leverage to get the next Anthony Kennedy. Kennedy, if you recall, was nominated by President Ronald Reagan. D.C. Circuit Judge Srikanth Srinivasan, who was confirmed by a unanimous 97-0 vote, and Ninth Circuit Judge Paul Watford are moderates who The New York Times reports are on the President’s short list. Sure, a moderate is not the GOP’s ideal, but it is within the realm of possibility. It also settles the matter before November, which works to the GOP’s advantage

Republicans might have greater power if they moved on from decisions of the past and looked to the future. Legalization of gay marriage could have been the best thing to happen to them, because it took the issue off the table. But when candidates continue to harp on their definition of marriage and promise to appoint justices who will overturn liberal decisions, it restarts fights that they already lost. They would fair better in the court of public opinion by arguing for a particular style of Constitutional interpretation, instead of complaining about settled law.

Since they’ve already failed to take this approach, they need to hedge their bets and take what they can. The way they’re going now, they could lose it all.