Remember That Time When Giuliani Fought To Protect Undocumented Immigrants? 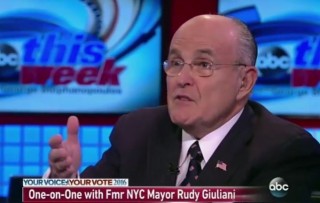 Anyone who was familiar with Rudy Giuliani’s career before he became “America’s Mayor” during post-9/11 hysterical patriotism is bound to notice that the Rudy of today bears very little resemblance to the one of yesteryear. He is now about to hold a key position in the Trump White House, and I think it’s worth reminding everybody back when he did have some reasonable positions, stood up for undocumented immigrants, and even defended so-called “sanctuary cities.” Those days are gone. Throughout Trump’s campaign, Giuliani has flung himself into the spotlight repeating inflammatory rhetoric and thriving off his staunch anti-immigrant positions. So, I ask, what the heck happened?

From his career as an esteemed federal prosecutor for the Southern District of New York to his rise as a popular two-term mayor, Giuliani was a pull-no-punches get-things-done kind of guy. He was known for driving a stake through the heart of the mafia, for cleaning up the streets of New York, and for having a firm grasp on the power of consistency in law. Of course, as mayor, Giuliani hardly went uncriticized, and many today (including the New York Times Editorial Staff) feel that his leadership after 9/11 simply fueled the revisionist version of what had actually been some pretty lousy governing while in City Hall.

For me personally, Rudy Giuliani represented a great many important things. As a second-generation Italian-American growing up in a predominantly Italian-American neighborhood, I was aware of Giuliani’s work against the mafia even as a high school student. I was inspired by his work, and even more so by his public calls for those of Italian heritage to distance ourselves from the cultural phenomenon of romanticized organized crime. Later, while attending law school in New York City, I studied the cases of insider traders Ivan Boesky and Michael Milken, and learned how my then-mayor had taken them down.  When I became a newly-minted member of the bar, I worked as a child abuse and neglect prosecutor under the Giuliani administration; I was proud of the work we did under our Mayor’s leadership, and I still am.

Rudolph Giuliani was a man who used law as his voice. Whether or not one agreed with his goals, Giuliani pursued those goals with reasonable and pragmatic interpretations of law, and deference to well-settled legal and governmental principles. He was a blunt and sometimes brash communicator, but his positions on issues were always rooted in logic, law, and reality.

One of the many lawsuits Mayor Giuliani advanced on behalf of New York City was filed 1996; Giuliani sued the federal government, arguing that a federal welfare law improperly conflicted with a New York City Executive Order. Executive Order 124 had first been signed by Ed Koch in 1989, and reaffirmed by both David Dinkins and Rudy Giuliani; it prohibited city employees from reporting the immigration status of an undocumented immigrant unless that person was suspected of having committed a crime. But a 1997 federal law attempted to eliminate so-called “sanctuary cities” by disallowing the kind of prohibition made in Executive Order 124.

Giuliani had been clear on his position regarding undocumented immigrants in New York City. At 1994 press conference, he said, “Some of the hardest-working and most productive people in this city are undocumented aliens. If you come here and you work hard and you happen to be in an undocumented status, you’re one of the people who we want in this city. You’re somebody that we want to protect, and we want you to get out from under what is often a life of being like a fugitive, which is really unfair.”

When Giuliani announced he would sue the federal government over the conflict between Executive Order 124 and the new federal welfare law, the Mayor said that ending the executive order would ”create chaos in New York City.” Without the protection of law, undocumented immigrants might refuse to send their children to school, report crimes to the police or seek treatment for contagious diseases – choices that could cause wide-scale public health and safety problems for New York City. Giuliani regularly included these arguments in support of immigration in general and Executive Order 124, specifically, in his campaign speeches:

“The federal government will be forced to argue that it has to treat undocumented immigrants unfairly in order to discourage others from coming here,” he said. “Attempting to control immigration by creating a disincentive for a woman to report to the police that she has been beaten up by her husband is a very weak argument. And it’s a horrible position for the federal government to take.”

Ultimately, Giuliani lost the lawsuit on behalf of New York City, after a federal judge ruled that the federal welfare law and the NYC executive order weren’t diametrically opposed to each other such that the Tenth Amendment or the concept of federalism was threatened.

Mayor Giuliani’s position on undocumented immigrants showcased a nuanced understanding of the interplay between immigration laws and life as an everyday American. And he held onto that pragmatism even until 2001, when he said on WABC in 2001, “The city of New York, quite frankly, is quite tolerant of undocumented immigration and this shouldn’t surprise you because I’ve been the mayor for a long time and outspoken on this issue, even nationally, I happen to agree with that.”

But ironically, as 9/11 catapulted Rudy Giuliani into the national spotlight, so too did it mark the end of the leader he had been.  No longer was Giuliani the smart and aggressive former federal prosecutor; 9/11 made him a star who simultaneously personified New York’s victims and New York’s heroes. And now, it is that star power that is irresistible to the incoming Trump administration. In a Secretary of State Giuliani, many Americans would see exactly what they loved in their Candidate Trump – a cult of personality and trusted brand, even if most aren’t quite sure what that brand even represents. Obviously, Giuliani’s experience as a mayor is largely irrelevant to a potential cabinet position, but the real problem, to be blunt, is that Giuliani just isn’t that guy anymore. Now, he’s a rich businessman who earns a living delivering incendiary speeches and providing questionably vague “consulting” to foreign governments. He has made public statements that President Obama “doesn’t love” the American people, and “wasn’t brought up the way” real Americans were. He boarded the Trump Train without ever addressing the troubling campaign rhetoric promising to disregard law on a massive scale. And now, he seeks to lead the Department of State or maybe even become Attorney General under a president who was elected the most harshly anti-immigrant platform this country has ever seen.

People, even politicians, are allowed to change their minds. But a radical shift in philosophy, from valuing immigrants and their safety to pledging mass deportation, requires at least some explanation. President Elect Trump needs to realize that choosing a cabinet isn’t quite the same thing as casting Celebrity Apprentice; personalities matter, but not nearly as much as does experience and fitness.