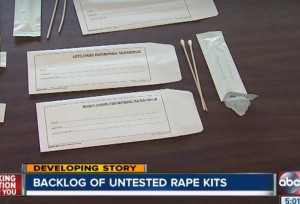 Kellie Green, a rape survivor, appeared with State Attorney General Pam Bondi at a September press conference to push for faster kit processing. She had worried if her attacker would ever be prosecuted. “I had actually given up, that I would never know who the rapist was,” she told ABC Action News in Tampa.

“Processing these untested kits will allow key DNA evidence to be entered into state and federal crime databases,” Bondi stated in a press release. “These entries can produce matches that could link criminals to unsolved crimes in Florida and beyond.” The FDLE wrote as much in their report.

State officials seek federal funding, but they will need at least $9 million to cover the costs. Plus, they’ll be competing with other states and cities for the cash. Good thing it is not 2008, when the economy almost imploded, and starved budgets.

Detroit, of all places—don’t act like it is a shining beacon—managed to push through 10,000 unanalyzed kits. Results highlighted 652 possible “serial rapists,” as the Miami-Herald writes. This had achieved dozens of convictions as of October.