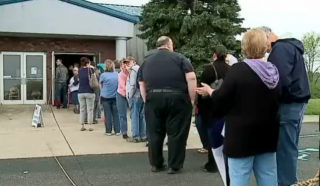 Polls are closed in most of Indiana. 57 Republican delegates and 92 Democratic delegates are up for grabs. Both Bernie Sanders and Ted Cruz are hoping to pull through with what many have dubbed as an unlikely win. But, remember, Indiana voters have been historically hard to poll because of a state law which largely bans “robo-calls.”

Voter turnout is expected to be high, which Trump supporters say works to their advantage. According to the AP,  286,219 filled-out ballots were received by county officials by 8 a.m. which is about 98 percent of the more than 293,000 ballot applications requested statewide. Overall, election officials say the process has been smooth. However, there are have been a few problems including complaints about long lines, and issues with election software programs.

Long line to vote at our new location in Hancock County – Indiana matters this year… pic.twitter.com/AvJ9J3QZS8

The line to vote this morning is crazy long… Don’t care. I will still exercise my right to vote. Don’t forget it’s Election Day Indiana! — Jon Kentfield (@jonclarkpond) May 3, 2016

Lines are still long but that shouldn’t stop you from #voting#primary#indianahttps://t.co/g309EiOVtFpic.twitter.com/vwxfepUhbi

“Only the perennial types of election day problems, such as delays in opening a handful of precincts due to late-arriving poll workers or locked facilities without handy keys. Some isolated reports of voters questioning if their votes were registering correctly on machines, but no evidence of any systemic problems,” Brad King, co-director of Indiana Election Division told LawNewz.com.

In one county,  there was a computer software glitch that was reportedly did impact voters.

An election official in a central Indiana county says software problems that created long waits at some polling places led some people to leave without ever voting in Tuesday’s primary.

Hancock County’s Clerk of the Courts, Marcia Moore, says the software vendor for the county, just east of Indianapolis, “really let us down” with computer glitches.

The Indiana Election Division told LawNewz.com that the computer problem only affected one local office race.