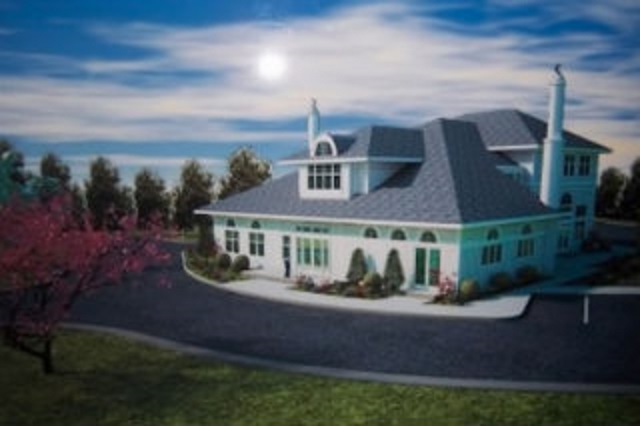 Well, it looks like a rich New Jersey suburb is going to pay the price for its Islamophobia. After lengthy litigation, Bernards Township has settled the lawsuits brought by the Department of Justice and the Islamic Society; while the details aren’t public just yet, I think it’s safe to say Bernards will be paying up in a big way. Don’t cry too many tears for this affluent town, though. It had its chance to do the right thing, and it chose wrong, time and time again.

More than five years ago, the Islamic Society of Basking Ridge tried to get a permit to build a mosque in Bernards Township, a wealthy suburb in central New Jersey. The mosque (pictured in an artist’s rendering above) would hold 150 people on a four-acre parcel of land, which was already zoned for houses of worship. Sounds simple, right? Well, it probably would have been if we were talking a church or synagogue – but the golfers in Basking Ridge seemed considerably less keen on mosques than they were on churches. And by “less keen,” I mean “determined to discriminate against.” The township denied the permit to the Islamic Society – based on some seriously shady reasoning.

The zoning board demanded that the mosque provide 107 parking spots for its 150 worshipers – which doesn’t sound so crazy until you compare it with the requirements for churches, synagogues, restaurants, or auditoriums of the same size –which would have been only 50 parking spots. The increased parking requirement meant that the mosque wouldn’t have been able to comply with requirements for drainage and lighting, and therefore, couldn’t be built as planned. Not. A. Coincidence. The township was allegedly using its power to regulate parking to discriminate.

If the facts of the case don’t convince you, there is also plenty of contextual Muslim-hatred to fill in the cracks. There’s John Malay, who served on the Planning Board and the Township Committee, who wrote that, “As a religion, Islam owes its size and influence to a tradition from Day 1 of forced conversions through violent means.” There’s also the fact that the township attempted to prevent Mohammad Ali Chaudry, the president of the Islamic Society, and a former mayor of the township, from participating in a Sept. 11 commemoration.

Bernards isn’t the first township in New Jersey to wield its power against a mosque. Bridgewater did the same thing, and in 2014, it settled a similar lawsuit with the Al Falah Center. That settlement resulted in a mosque being built (albeit on a different road) and a $7.75 million payout by the township. Side eye to all you fiscal conservatives.

Set against the backdrop of the Bridgewater case, the lawsuit against Bernards was a claim born in litigation heaven. The case proceeded before the same federal judge that presided before the Bridgewater one – Michael Ship. And as Judge Ship found in that case, the religious discrimination afoot violated the plaintiffs’ rights to the free exercise of their religion. In December 2016, Judge Ship wrote a 57-page decision that called out Bernards for its discrimination. That, right there, was the win for the plaintiffs.

On Tuesday, probably knowing it would lose and lose big, Bernards Township settled with the DOJ and the Islamic Society. Most of the details of that settlement haven’t been announced yet. But the most important one – that the mosque will indeed be built in Bernards Township—is at the heart of the settlement. Given the township’s egregious behavior, and given that this wasn’t the first, but the second lawsuit of its kind before Judge Ship, I’m willing to bet the plaintiffs held out for a settlement even larger than the $7.75 million that Bridgewater paid out. We at LawNewz.com will keep you posted on this one. Bottom line, though, this case may have ended with a settlement, but it’s definitely one to put in the “win” column.