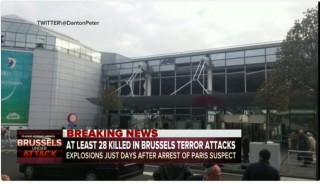 ISIS sympathizers have already taken to social media to celebrate the deadly terror attacks that killed at least 28 people in Brussels Tuesday morning. ISIS has not officially claimed responsibility for the attacks. The nation-wide terror alert for Belgium was raised to level four — its highest — after explosions hit the airport and one subway station there early Tuesday morning.

The Jerusalem Post is reporting that the sympathizers are using the #brusselsisonfire hashtag to express their happiness in the wake of the attack. They report that the most popular remark under the hashtag was: “You declared war against us, and bombed us, and we attacked your home land.” Many ISIS supporters are also saying that the explosions are aimed to pressure Belgian security authorities to release Saleh Abdeslam, who was one of the Paris attack suspects who was just arrested in Belgium on Saturday.

The supporters also expressed on Twitter that the attacks were intended as revenge for a series of airstrikes by the West over the weekend, according to the Post.