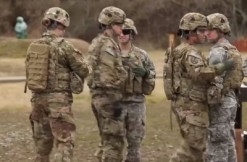 On Wednesday, The House Armed Services Committee voted to require women to register for the draft. Plot twist: The measure’s sponsor voted against it. Iraq War vet and Congressman Duncan Hunter, R-Calif., made the proposal to spark a debate about women in the military, but he’s against dames in the draft. His plan backfired just a little bit.

The measure passed 32-30 after several Republicans joined Democrats in support. It would require women age 18 to 26 to sign up for the Selective Service. It’s now part of the defense budget for the next fiscal year, which begins Oct. 1. That bill is expected to face a full House vote in May, according to The Washington Post. It would then need Senate and Presidential approval to become law.

Rep. Martha McSally, R-Ariz., an ex-Air Force pilot, said there are plenty of non-combat positions for women to fill, according to The Associated Press.

Hunter made the proposal in response to Defense Secretary Ash Carter’s policy change in Dec. 2015, opening all military jobs, including combat roles, to women. The congressman wanted to make the draft policy Congress’ choice, not the executive branch’s, The Military Times reports.

“The draft is there to get more people to rip the enemy’s throats out,” he said, according to The Hill. “I don’t want to see my daughters put in a place where they have to get drafted.”

At least one supporter of the measure was ambivalent. Rep. Tulsi Gabbard, D-Hi., an Army vet, said she thought the draft was hardly ideal, and preferred a volunteer service, which she claimed produced better soldiers. She said Wednesday’s debate was “misguided,” according to The Post.

Secretary Carter’s policy change undermined the legal structure keeping women out of the draft. In 1981’s, Rostker v. Goldberg, the Supreme Court said it was constitutional under the Fifth Amendment to keep women out of the draft since the Department of Defense already excluded women from combat.