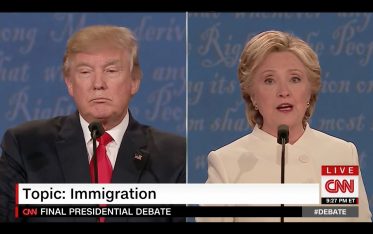 Perhaps one of the most significant items to come out of the hacked emails released by Wikileaks thus far, are the excerpts and transcripts of Hillary Clinton’s paid speeches to Wall Street banks and other financial institutions. In one excerpt from a speech given to group of wealthy Brazilian bankers, Clinton said her “dream is a hemispheric common market, with open trade and open borders, some time in the future with energy that is as green and sustainable as we can get it, powering growth and opportunity for every person in the hemisphere.”

In the lead up to the debate, Donald Trump has used this against her consistently at campaign rallies, claiming its evidence that Clinton really wants amnesty and open borders.  Clinton, however, has been relatively low key in recent weeks, and has not been asked by the media what she meant by that statement.

That all changed on Wednesday night when debate moderator Chris Wallace asked Clinton about that specific excerpt.

At the outset, it should be noted that Clinton’s answer seems to confirm the authenticity of the of the Wikileaks document.  Her campaign spokespersons and surrogates have spent the past few weeks subtly suggesting the documents may have been altered, but Clinton seems to have no hesitation acknowledging the excerpted quote is genuine.

In response to Wallace’s question, Clinton immediately defends herself by suggesting the statement has been taken out of context and suggested if one went on to read the rest of the sentence they would see she was talking about trade, and a cross border energy grid.   She then pivoted into an attack on Wikileaks.

Unfortunately, we are only able to view the excerpt from the speech because Clinton still refuses to releases the full transcripts of many of her paid speeches.  Here is the quote, again:

“My dream is a hemispheric common market, with open trade and open borders, some time in the future with energy that is as green and sustainable as we can get it, powering growth and opportunity for every person in the hemisphere.”

One well known fact-checking organization reviewed this issue in the context of Trump claiming Clinton wants open borders, and scored Trump’s claim as “Mostly False.”  In reaching its conclusion, Politifact interviewed a few immigration experts who agreed that Hillary must’ve been talking open borders in terms of trade and energy.   However, one expert interviewed by Politifact opined that Clinton had to be taking about both trade and immigration

Jacob Vigdor, professor of public policy and governance at University of Washington, said the use of “open borders” would be redundant if she was only talking about trade or energy. In his opinion, “open borders” means immigration as well.

Yet, even with that, Prof. Vigdor was willing to give Clinton an out by calling her remarks merely a “statement of ideals” with no set time table.

Other “fact checkers” at the Los Angeles Times simply ignored the Wikileaks tapes altogether and instead, they simply take Clinton at her word, telling readers, “None of Clinton’s proposals suggests ‘open borders’ that allow “everybody” to enter.”

Likewise, “fact checkers” at the Daily News also make no mention of the Wikileaks speech transcripts and simply attack Trump by quoting from a Clinton campaign stump speech where she claimed to be for securing the border.  I kid you not.

With “fact checkers” like these, its no wonder Hillary Clinton seems content to keep a low profile and avoid most media engagements through the rest election.

This is an opinion piece. The views in this article are those of the author.