Descendants of Georgetown University Slaves Will Get Admissions Preference 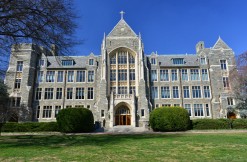 In 1838, Georgetown University officials sold 272 people to a Louisiana plantation in order to supplement lean funding. On Thursday, school President John J. DeGioia announced he plans to make up for their legacy by giving admissions preference to the slaves’ descendants.

“We will give descendants the same consideration we give members of the Georgetown community in the admissions process,” he wrote in a statement. “In addition, our need-blind, meet-full-need commitments provide a framework in which to support students who are unable to meet the cost of attending Georgetown.”

Georgetown currently gives the children of alumni “legacy” status, preferential treatment during admissions. The school will make several other changes including renaming buildings after Isaac Hall, one of the slaves, and Anne Marie Becraft, an antebellum black educator. The buildings’ current namesakes just so happen to be the same officials, both university presidents, who sold Hall and the others. The school will also start an institute geared toward the study of slavery.

The announcement is joined by a report from a research group started by DeGioia. It looked at the university’s slave past, and examined ways to make up for it.

[image via Richard Cavalleri and Shutterstock]
–