Can Students Kneel During National Anthem? 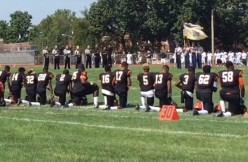 Are you one of the many K-12 graders who, no doubt, read LawNewz.com on a daily basis? Want to join Colin Kaepernick’s kneeling protest during the national anthem? Then you need written permission from your parents, at least if you live in Florida.

“When the national anthem is played, students and all civilians shall stand at attention, men removing the headdress, except when such headdress is worn for religious purposes,” says a state law enacted in 1942.

This is an old statue in a new context. Kaepernick, the quarterback for the San Francisco 49ers, sparked a controversy in August when he refused to stand for the National Anthem. He is protesting police brutality against people of color, but critics said he was disrespecting military veterans. He started kneeling in a bid to redirect the narrative, and show respect to the U.S. armed forces.

Some adults, like soccer player Megan Rapinoe, started emulating him, and it seems like some kids have followed too.

For example, an Illinois student refused to stand for the Pledge of Allegiance in late August, and his teacher allegedly manhandled him, trying to pull him out of the chair.

Also take a look at a Massachusetts student athlete who kneeled during the anthem at his high school football game. He told reporters that he was suspended for one game, but later said that the punishment was lifted.

The situation recently escalated in Collier County, Florida. Students at Lely High School got a stern demand: stand for the anthem during school-sponsored events, or go home.

“You will stand and you will stay quiet,” said Principal Ryan Nemeth in a statement obtained by WFLA. “If you don’t, you are going to be sent home and you’re not going to have a refund of your ticket price.”

Professor Catherine J. Ross laid out the legal issues at play during an exclusive interview with LawNewz.com. She’s a First Amendment expert at George Washington University Law School and author of the book, Lessons in Censorship: How Schools and Courts Subvert Students’ First Amendment Rights. She pointed out that case law is largely on the kids’ side. Since the 1943 Supreme Court case West Virginia v. Barnette, they have the right to not participate in the Pledge of Allegiance, and “presumably, the National Anthem.”

Things work out differently in practice, however.

“Despite that, schools regularly send kids home for not participating in civic exercises,” she said, though she added that students don’t have the right to be disruptive.

Ross pointed that the Florida law is the only one of its kind nationwide. It has never faced the Supreme Court, but lower courts have upheld it since it technically treats the matter as an issue of parental authority granted by the state legislature. In other words, this law operates under the assumption that parents would make their kids stand for the National Anthem and the Pledge of Allegiance. She added, however, that students who lack exemptions are still protected.

Principal Nemeth doesn’t have the constitutional authority to send kids home, she said: “I would argue that at school-sponsored events, students have at least as much right to refrain from participating as they have in the classroom.” She said that Florida parents, even those who disagree with the message, should sign pledge exemptions if their kids wanted it. She called this an important civic exercise.

“I think that the main takeaway is that school officials don’t fully understand the expressive rights that students have in school, and they trample on rights that have been clearly stated by the courts,” she said.