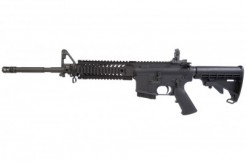 There is neither any grandfather clause nor reimbursement.

State law defines “large-capacity magazines” as anything with more than 10 rounds. These are often made for assault-style, semiautomatic rifles. California already banned the sale and loan of high-capacity rounds, but this new law goes further. Starting on July 1, 2017, anyone who violates the law is subject to a year in jail, and a $100 fine for a first offense. Any third or subsequence offense can get offenders fined for up to $500.

There are exceptions to the bill, however, such as “honorably retired sworn peace officers.”

California is one of eight states that generally bans high-capacity magazines, according to the Law Center to Prevent Gun Violence.

The passage of SB-1446 comes amidst a fraught debate over gun control in America. On June 12, Omar Mateen murdered 49 and injured 53 people at a gay nightclub in Orlando, Florida. He was armed with a knife, a handgun, and the Sig Sauer MCX rifle.