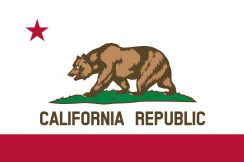 California has extended its ban of state-sponsored and funded travel to states with laws it believes discriminates against LGBT+ people, adding four new states in addition to those it initially issued the restrictions upon.  The original law went into affect on January 1, declaring that California “must take action to avoid supporting or financing discrimination against lesbian, gay, bisexual, and transgender people” and banned state-sponsored travel to Kansas, Mississippi, North Carolina, and Tennessee to stand against discriminatory legislation.  Now, California has decided to block funds for travel to Alabama, South Dakota, and Texas after they passed bills that could prevent same-sex couples from adopting children, and included Kentucky for passing legislation that would allow student groups to bar LGBT+ students from joining their organizations in the name of religious freedom.

“These discriminatory laws in Texas, North Carolina, South Dakota, and other states are completely out of step with the values that make California the vibrant economic powerhouse that it is,” Executive Director of Equality California, an LGBT civil rights organization Rick Zbur said according to CNN. “[I]t is imperative that California continue to denounce those actions publicly and financially.”

“While the California DOJ works to protect the rights of all our people, discriminatory laws in any part of our country send all of us several steps back,” California Attorney General Xavier Becerra said in praise of the new legislation. “That’s why when California said we would not tolerate discrimination against LGBTQ members of our community, we meant it.”