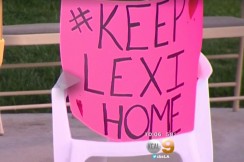 A family in Santa Clarita, California just lost a custody battle over their Native-American foster daughter thanks to a federal law that is actually meant to protect her based on her race. Officials for the Los Angeles County Department of Children and Family Services removed 6-year-old Lexi from the home of Rusty and Summer Page on Monday. Now she’ll live with her father’s relatives, who are Choctaw, in Utah.

“Our family is so incredibly devastated,” Lexi’s foster family said in a statement. “Our hearts are broken, and we are trying to make sense of everything that has happened.”

Rusty Page was sobbing when the girl was removed from his home. It’s the end of Lexi’s four-year stay. He told reporters, who captured the transfer on tape, his foster daughter’s final words to him: “Don’t let them take me. I’m scared. I’m scared. Don’t let me go.”

The girl is barely part-Choctaw, according to her foster family. In fact, just 1.5 percent, they told KTLA. Nonetheless, she is still under the umbrella of the Indian Child Welfare Act.

The backstory behind this goes beyond Lexi’s foster parents and her Choctaw blood family. The Indian Child Welfare Act was signed in law in 1978. As the National Indian Child Welfare Association puts it, Congress passed it “in response to the alarmingly high number of Indian children being removed from their homes by both public and private agencies.”

University of North Dakota Law Professor B.J. Jones has said that 25 to 35 percent of Native American children were moved from their birth families to non-Native homes by government agencies.

“The tribe’s values of faith, family, and culture are what makes our tribal identity so important to us,” the Choctaw Nation said in a statement. “Therefore, we will continue to work to maintain these values and work toward the long-term best interest of this child.”

For them, this means moving her to Utah.

Clearly, this law was written with pure intentions, but that means nothing to Rusty and Summer Page, who seem utterly destroyed.

“Our daughter is just one of many victims of the Indian Child Welfare Act, a horrific law that the U.S. government continues time and time again to give absolute power to tribal leaders who judiciously abduct children at will,” Rusty Page said to reporters.

The foster family promises to keep fighting for custody.