Why Dreamers Should Lose at the U.S. Supreme Court 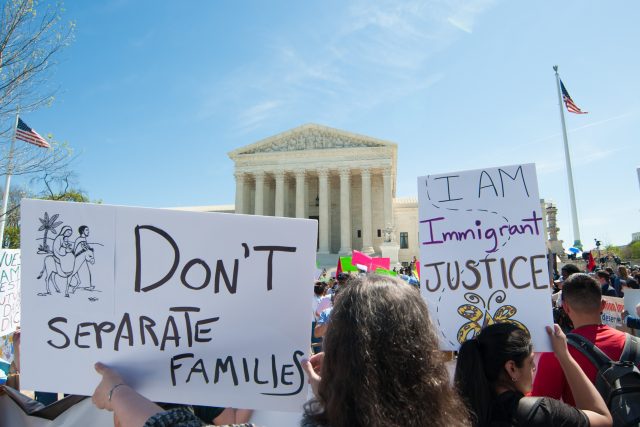 President Donald Trump appealed – directly to the Supreme Court — the most recent California district court’s ruling preventing the him from enacting his own executive immigration policy, this time about President Barack Obama’s executive orders on “Dreamers.”  Legally, Trump should win, and the dreamers should lose (the politics of the issue will be left to Congressional negotiations and 2018 midterms). Three reasons show why the Supreme Court is likely to reverse U.S. District Judge William Alsup, invalidate the injunction, and reinstate President’s Trump’s reversal of ex-President Obama’s Deferred Action for Childhood Arrivals (DACA).

First, the Supreme Court has already twice reversed Alsup in this very case on preliminary matters. Second, the new-found habit of district court judges issuing national injunctions over parties not present in the case invites a dangerous venue-shopping tactic already disfavored by the Supreme Court. Third, the Constitution is quite clear: the president can reverse any prior unilateral executive action of a prior president, especially an action as suspect as Obama’s unilateral executive action in DACA. This danger to the tripartite balance of power, the commitment to Constitutional constraint, and the rule of law will not go unexamined by the Supreme Court.

A little factual background. In 2012, President Obama, facing re-election and a Republican Congress, issued an executive action without legislative approval known as DACA. DACA gave undocumented immigrants, who were mostly brought here as minors, temporary amnesty from arrest, prosecution or deportation, authorized work permits, and extended federal spending and benefits on their behalf. In 2017, Trump terminated DACA, but suspended the termination for a specific time period to permit legislative negotiation on a legislative solution. The legal pretext for Obama’s action was to label DACA a “prosecutorial” preference policy; the legal pretext for Trump’s action was that unilateral executive action was dubious Constitutionally and tenuous politically. A group of DACA supporters sued. Unsurprisingly, they chose the Northern District of California, the most politically liberal federal courthouse in the country in the most politically liberal federal circuit (9th Circuit) in the country. Judge William Alsup, a Clinton appointee, presided. Alsup issued an injunction precluding the President from reversing Obama’s DACA. Unsatisfied with the geographical and party-driven limitations on his injunctive power, Alsup issued a nationwide injunction, despite the Supreme Court’s specific demands a district court neither issue relief to parties not before it, nor beyond its geographic reach. (Califano v. Yamaski, 442 U.S. 682, 702; Doran v. Salem Inn, Inc., 422 U.S. 922; Dep’t of Defense v. Meinhold, 510 U.S. 939)

The legal pretext for Alsup’s order relied upon the Administrative Procedures Act, the Due Process Clause and the Equal Protection Clause of the Fifth Amendment. Alsup concluded that a President can unilaterally defer deportation even though Alsup acknowledged such a power has “no statutory basis.” Instead, Alsup asserted this power as “inherent” to the executive. But then, Alsup claimed the executive cannot revisit a prior deferment determination if based on a “mistake of law” about the reason for its decision.

Alsup flipped the script by claiming – without a single citation to a single precedent – that a prosecutorial deferment program can never be reversed without meeting strict standards and judicial review, vests Constitutionally protected “expectations” in the individuals subject to the prosecutorial deferment program, and that the Attorney General of the United States is not allowed to rely on a Fifth Circuit decision invalidating the very similar DAPA program in 2015, a decision affirmed by the Supreme Court.

To achieve this, Alsup claimed the words an executive action “not in accordance with law” meant an executive official made an interpretation of law that Alsup did not agree with. This leap of logic and law – confusing whether an executive official had the right to interpret the law with whether an executive official’s interpretation was the same as Alsup’s – is the kind of judicial activism that Constitutional conservatives have long complained of. Alsup didn’t hide his political bias – he concluded as a matter of “fact” the politically controversial conclusion that DACA prevented “widespread harm” in making sure 689,000 illegally present people could work, a weighting of a harms particularly inappropriate for the unelected judiciary in reviewing the executive action of the only nationally elected officeholder. Alsup’s new interpretation is that an executive action is “arbitrary” and “capricious” and “not in accordance with the law” if a judge disagrees with the legal logic of the executive branch for a particular policy choice Constitutionally committed exclusively to the executive branch. Notably, Alsup failed to cite any Supreme Court precedent for this novel theory of judicial oversight.

The real irony here is that conservatives will see Alsup as committing the kind of abuse of power in the judicial branch – unilateral review and substitution of decision-making of another branch of power – that DACA critics noted of Obama: extending executive power unilaterally over the legislative branch, and substituting his judgment for theirs. It appears the only legal consistency from the professional class left these days: we can do whatever we want from whatever position of power we happen to have at the moment, even if that means we have to reverse the precedents we created whenever we lose a particular position of power. A true “living Constitution” which means whatever a judge, or executive official, or legislative branch claims it means, at any random moment, reversing itself regardless of past or precedent, whenever the outcomes no longer suit the decision-maker. As if Derrida and Foucault wrote the Constitution rather than Jefferson and Mason. This does more than degrade the rule of law; it destroys it.

[Image via via Rena Schild/Shutterstock]