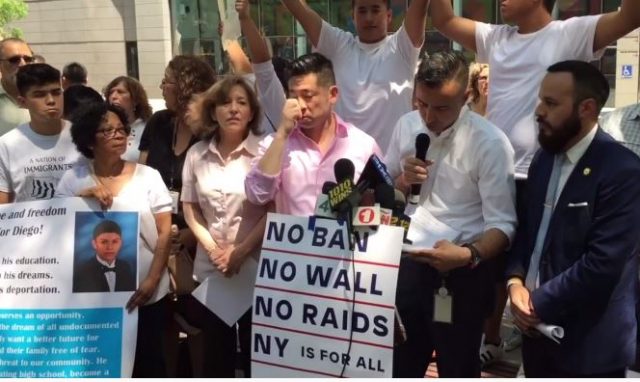 His mother, an undocumented immigrant from Ecuador who entered the United States with her son two years ago, had been arrested and detained the day before, authorities say.  Puma Macancela spent that night with his cousin, 21 year-old Gabriela Macancela, in her apartment.  The next morning, ICE officers arrived at the apartment to arrest him.

Puma Macancela initially hid in a bedroom closet as ICE pounded on the apartment door, demanding he come outside.  His cousin hid underneath her bed as she and her father received phone calls from officers telling her they would break down the front door if he refused to leave.  The teen told the Post he feared that if the officers came inside, his other undocumented relatives inside would be at risk of arrest as well.  To protect his family from potential deportation, Puma Macancela wished his relatives goodbye and turned himself in to the authorities.

From there, the high school student was arrested and detained in a New Jersey detention facility separate from his mother, who is currently at Orange County Correctional Facility in New York.

The nonprofit group Neighbors Link is handling his case.  “He is petrified,” the organization’s Executive Director Carola Bracco said.  “He is scared to death he’s going to be sent back to Ecuador.”  Numerous lawyers, lawmakers, and even his school district’s superintendent have assembled to show support for Puma Macancela.  In a letter to ICE, Representative Nita Lowey (D-NY) wrote that he “genuinely fears for his safety and well-being if returned to Ecuador” and asked for him to receive a stay of removal.  “A productive and contributing member of our community, his only crime was being brought to the United States as a minor by a parent.”

The Ossining Schools Superintendent Ray Sanchez expressed similar support for him to stay.  “Given permission by the courts, we would, of course, welcome our student back for his final exams and graduation next week,” he said.  Immigration activists and Ossining high school students held a rally outside of a federal courthouse in Manhattan to protest his arrest.

“What possible justification does ICE have in drawing his name and making him the victim of their target enforcement last Thursday?” State Assemblyman Francisco Moya said at the protest.

Puma Macancela was planning on graduating and taking classes through his high school to become a certified auto mechanic.  His lawyers officially filed a request for a stay of removal on Monday, but it is now up to immigration authorities to decide his fate.