Federal Judge Slams ICE, Compares Them to ‘Regimes We Revile’ 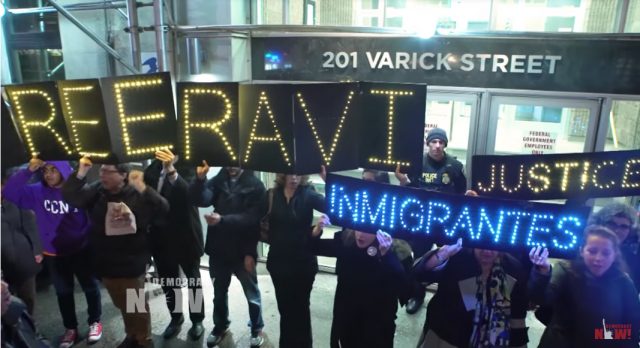 Judge Katherine B. Forrest of the Southern District of New York is not known as a political firebrand in New York City, but on Monday she issued an order demanding the release of immigrant’s rights activist Ravi Ragbir, who heads the Sanctuary Coalition of New York City.

Along with that order, however, Forrest included a blistering takedown of the United States’ most infamous immigration enforcement agency. In the opening lines of her seven page order, she noted:

There is, and ought to be in this great country, the freedom to say goodbye. That is, the freedom to hug one’s spouse and children, the freedom to organize the myriad of human affairs that collect over time. It ought not to be—and it has never before been—that those who have lived without incident in this country for years are subjected to treatment we associate with regimes we revile as unjust, regimes where those who have lived in a country may be taken without notice from streets, home, and work. And sent away.

Forrest’s order continues, citing the U.S. Constitution as a greater law than ICE’s mandates or actions. She writes:

We have a law higher than any that may be so interpreted–and that is our Constitution. The wisdom of our Founders is evident in the document that demands and requires more; before the deprivation of liberty, there is due process; and an aversion to acts that are unnecessarily cruel. These fundamental rights are at issue in this case.

Forrest also complained that ICE’s current understanding of the “statutory scheme” which gives the agency its enforcement authority is akin to attempting to navigate a “corn maze.”

Ragbir was arrested without warning by ICE’s black jackets on January 11 after completing a voluntary immigration check-in. Prior to his arrest, Ragbir had lived and worked in the country for nine years without incident. His treatment by ICE agents has been widely criticized as the latest volley in the agency’s campaign against their political opponents.

Forrest’s order grants Ragbir’s request for the writ of habeas corpus but does not stop his deportation proceedings. In other words, Ragbir will be allowed to live out the remainder of his time in the United States in his own home, with his family, outside of the confines of an ICE detention center–but he’ll still be kicked out of the country.

Forrest writes, “Constitutional principles of due process and the avoidance of unnecessary cruelty here allow and provide for an orderly departure. Petitioner is entitled to the freedom to say goodbye.”