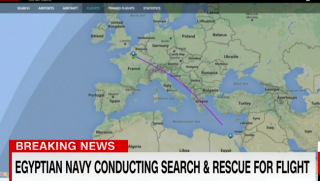 Search and rescue teams are searching the Mediterranean  near a Greek Island for an EgyptAir flight that crashed shortly after taking off from Paris, France. There were 66 people on board, including 3 children. Authorities believe the plane has crashed, but they have not said exactly what happened or if the crash was terrorism related.

The Egyptian military said they did not receive any kind of distress signal. Greek authorities say the plane made abrupt turns before vanishing and dropping 22,000 feet.  While terrorism is certainly a possibility, there has been no confirmation. That didn’t stop presidential candidate Donald Trump from taking to twitter.

Looks like yet another terrorist attack. Airplane departed from Paris. When will we get tough, smart and vigilant? Great hate and sickness!

Some pundits have already criticized Trump for not offering his condolences but instead declaring terrorism before receiving any confirmation. Egyptian authorities have also warned people not to jump to conclusions about what happened. Stay with LawNewz.com for updates on this case.