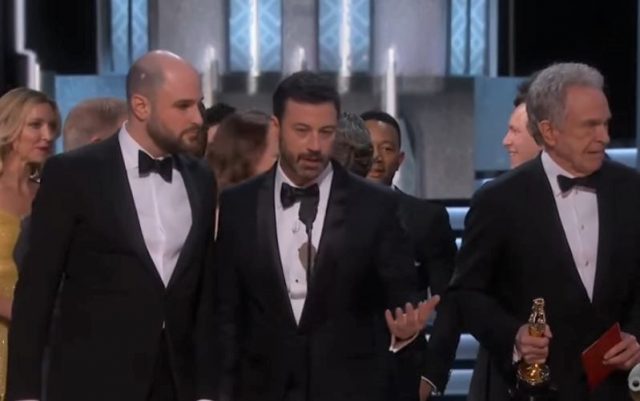 Yesterday’s Best Picture debacle at the Oscars made more than a few people wonder whether lawsuits could be filed for awkwardness so palpable that it’s practically tortious. The question on everyone’s mind after La La Land was announced the winner, only for a correction to be made during acceptance speeches, with the award then going to Moonlight is, “whose fault was that?” For lawyers, attributing fault is what we do with the same artistry and technique as any performer onstage. My favorite legal principle applied to the La La Land flub has to be the “Last Clear Chance” rule.

In tort law, some jurisdictions use this rule to handle contributory negligence. Under the doctrine, even a plaintiff who himself was negligent can still recover if he can prove that the defendant had the last opportunity to avoid the accident. The rule was created to map out liability in situations when both a careless defendant and a careless plaintiff “caused” an accident, such as when a negligent plaintiff trespassed onto railroad tracks and was hit by a train manned by an also-careless engineer. While the accident wouldn’t have occurred without the mistakes of both participants, the legal responsibility falls on the person whose malfeasance is in closest proximity to the harm.

At the 2017 Academy Awards, the mistaken announcement of La La Land as best picture was doubtlessly the result of multi-layered screw-ups. There was the soon-to-be-fired person who put the cards in the envelopes, the probably-already-fired person who should have double-checked those cards, Warren Beatty, who obviously noticed the error, and Faye Dunaway, who clearly did not. No doubt, if even one of these people had done the right thing, we wouldn’t have been subjected to that painfully awkward moment where a classy-but-shaken Jordan Horowitz announced that Moonlight was the real winner.

Beatty could have saved us all from one of the most uncomfortable moments in award show history if he’d simply said, “I think I have the wrong envelope,” but he missed the mark by punting to Dunaway. She failed to pick up on Beatty’s signals, and instead, just blurted, “La La Land!” PricewaterhouseCoopers partners Brian Cullinan and Martha Ruiz are officially responsible for all things voting and envelope, and there’s a likelihood that one of their mistakes may have been the seed from which the disaster grew. But if we’re using the Last Clear Chance Rule, the real blame would land on Ms. Dunaway, who could have become a hero, but missed her chance.