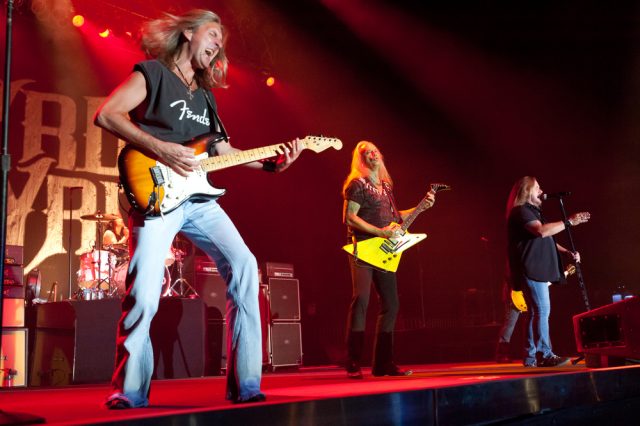 NEW YORK (AP) — A film created with help from a former Lynyrd Skynyrd drummer violates a “blood oath” surviving band members made not to exploit the band’s name and history, a judge concluded as he blocked its distribution, siding with a surviving member of the 1970s pioneering southern rock group and the widow of its lead singer.

The decision by U.S. District Judge Robert Sweet was unsealed Monday at the request of a lawyer for a Los Angeles-based independent record label that planned to distribute the film, “Street Survivors: The True Story of the Lynyrd Skynyrd Plane Crash.” It was dated last Wednesday.

In the 1970s, the band rode the popularity of classics like “Sweet Home Alabama” and “Free Bird” to stardom before lead singer and songwriter Ronnie Van Zant died in the October 1977 crash in Mississippi. The same year, the band released its final album: “Street Survivor.”

Evan Mandel, a lawyer for Cleopatra Records Inc. and Cleopatra Films, said in a Manhattan court filing that Sweet’s ruling did not disclose the “specific parameters” of relief to the plaintiffs. The judge, though, wrote that a ruling against Cleopatra would result in no profits from the film, which cost $1.2 million to produce and was finished this spring.

Mandel said he would seek “immediate relief” from an appeals court. He did not immediately return an email seeking comment.

The judge said the film relied, in part, on the memories of Artimus Pyle, who joined as the group’s drummer in 1975. The film focuses on Pyle, his relationship with other band members, particularly Van Zant, and events during and immediately following the plane crash.

Pyle was critically injured but survived the crash, as did founding band member Gary R. Rossington.

The judge said a dispute after surviving band members decided to commemorate the 10-year anniversary of the crash with a tribute tour resulted in an agreement defining when the parties could use the band’s name, its history or the name and likeness of Van Zant. Pyle signed the agreement, writing “Under Protest” adjacent to his signature. He performed until 1991, before signing a termination agreement.

In June 2016, Pyle signed a deal with Cleopatra that would pay him 5 percent of the film’s profits and give him a co-producer credit, the court ruling said. The judge said the film’s screenwriter, Jared Cohn, regularly received historical information from Pyle, who reviewed his outline and script, offering comments and revisions. The judge said Cleopatra also solicited Pyle’s views on casting and costumes and let him provide feedback on the accuracy of the portrayals by actors.

After hearing publicity about the film last summer, the plaintiffs sent Cleopatra the 1988 court order in July 2016 after only about $7,000 had been spent developing the film, the judge noted.

This article was written by  Larry Neumeister of the AP.