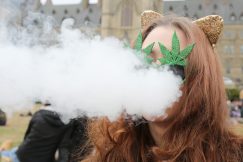 A woman smokes marijuana on Parliament Hill on 4/20 in Ottawa, Ontario, April 20, 2017.
Polling released Thursday showed strong support in Canada for a government drive to legalize recreational use of marijuana, but many would like the proposed minimum age for consumption to be raised. Sixty-three percent of respondents told the Angus Reid Institute they support legalization. / AFP PHOTO / Lars Hagberg (Photo credit should read LARS HAGBERG/AFP/Getty Images)