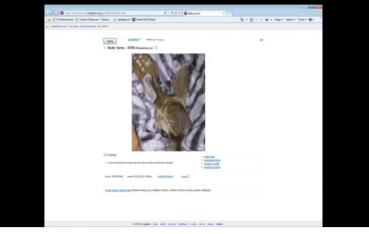 A 28-year-old woman was arrested by California Department of Fish and Wildlife wardens after she allegedly attempted to sell a baby fawn on Craigslist.

Lt. Chris Stoots of the California Department of Fish and Wildlife told SFGate.com that state wardens saw an ad on Craigslist on Tuesday that offered to sell a baby deer for $300.  State wildlife officials then set up a sting operation where wardens posing as interested buyers responded to the ad and arranged to meet the seller at designated location to purchase the animal.

Lt. Stoots said the seller, identified as Lacy Jean David, was arrested when she arrived at the designated meeting location with the baby deer.  She reportedly told wardens that she found the animal along the side of the road and thought she was helping the animal by trying to sell it.  The wardens then explained that capturing a wild animal and selling it online is illegal.

According to the report, illegal possession and sale of wildlife is a misdemeanor in California that carries a penalty of up to one-year in jail and $1,000 fine.