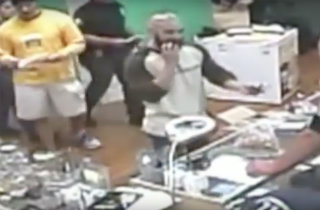 The city of Santa Ana, California has agreed to pay up to settle a lawsuit stemming from a disastrous raid on marijuana dispensary Sky High Holistic, in May 2015. According to the Orange County Register, the city has agreed to pay $100,000 and drop the charges against 12 people accused of operating the business unlawfully, as they did not get a license in the “lottery” that the city held. The settlement was arguably an inevitable in light of what the shop’s security system recorded during the raid, the most damning of which was arguably an officer eating what appears to be one of the marijuana-infused snacks available for sale.

One of the voices on the video can be heard asking “What flavor?” as one of the officers unwraps and eats the product. The officers also make a point of trying to remove the security cameras, and this exchange took place regarding Marla James, a customer/patient with a leg amputation who was volunteering at the store at the time of the raid:

Male Officer: “Did you punch that one-legged old Benita?”
Female Officer: “I was about to kick her in her fucking nub.”

The $100,000 settlement will be divided up by her, David James (presumably her husband), and Dr. Bradley Idelshon, who was not affiliated with Sky High Holistic but lost power and water during the raid. The plaintiffs’ attorney, Matthew Pappas, told the Register that he is still seeking damages on behalf of the dispensary as well as the return of the inventory and money seized in the raid.

The three officers who conducted the raid are no longer with the Santa Ana Police Department for reasons that have not been publicly disclosed. They have been charged with misdemeanor petty theft, though.