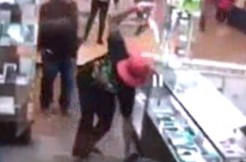 Jovaughn Walker has been charged for attacking a store clerk with a sword, according to authorities. Two people were reportedly sent to the hospital after Walker, 21, allegedly freaked out at a store in Lauderhill, Florida on Sunday morning.

“I have seen the [surveillance] video tapes, and these attacks seem to have come out of the blue,” said Maj. Rick Rocco, according to The Sun-Sentinel. “It doesn’t look like he had any argument or confrontation. All of a sudden, he just snapped.”

First, there was a reported attack with a metal rod at a gas station, then Walker allegedly fled in a stolen truck, and popped up later at a flea market called Swap Shop. There, he went to a store that sold sharp objects, including a sword. This he allegedly grabbed, and used. His alleged victim Parmjit Singh, 49, fought back and survived.

Here is the video from inside the store:

Walker said he saw ghosts, and wanted “to kill all that was evil,” according to an affidavit obtained by The Sun-Sentinel. Cops also say he was possibly high, and they reportedly found two grams of cannabis on him.

All in all, he faces charges of attempted murder, aggravated battery, carjacking, and possession of cannabis.