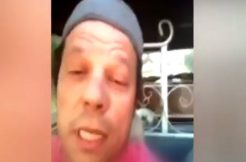 Oklahoma man Michael Dale Vance, Jr. is on the run after a horrific crime spree, investigators say.  Investigators believe this 38-year-old and another man shot two officers on Sunday, then he stole a cop car, then he stole another car after shooting the driver, and finally, he made Facebook Live videos before killing his aunt and uncle via an apparent attempt at decapitation.

In the first video, he claimed he was “set up” somehow.

The Lincoln County Sheriff’s Office said they arrested the other person involved in the police shooting. Oklahoma County Sheriff’s Office is investigating the murder. An arrested affidavit obtained by ABC says that uncle Ronald Everett Wilkson, who was 55, and aunt Valerie Kay Wilkson, who was 54, sustained stab wounds to the neck that were “consistent with an attempt to severe” their heads. Ronald was also shot, and Valerie sustained defensive wounds on her arms. Investigators reported finding a blood-covered knife in the home, a bloody shirt, and shell casings associated with an assault rifle similar to the AK-47.

Vance remains at large. The last known whereabouts: He is the suspect in an attempted carjacking that took place Monday morning at a convenience store in Sayre, Oklahoma. The victim, who survived getting shot in the leg, identified Vance as the culprit, said Sayre Police Chief Ronnie Harrold. He is wanted on two counts of first-degree murder, charges of unauthorized use of a motor vehicle, and possession of a firearm after former conviction of a felony.
Here’s the most recent wanted poster from the Lincoln County Sheriff’s Office. Current as of Tuesday afternoon:

“Suspect has medical condition and may try to spread the disease,” they say.