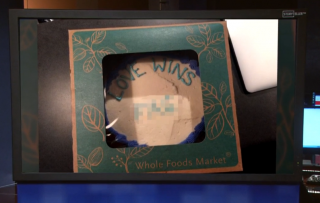 A Texas pastor who ordered a cake from a Whole Foods store says that when he got it, a homophobic slur was written across the top in frosting. Pastor Jordan Brown, 30, who is openly gay, claims that he requested that the cake say “Love Wins” on it, but it wasn’t until he took it into his car that he noticed it said “Love Wins F–,” KEYE reported. Whole Foods denies the report.

Brown then went on YouTube to show and discuss what happened.

Brown called the store, and says a representative was apologetic, but said there was nothing he could do and that his employee did not write the slur on the cake, even though he says the box was sealed when Brown picked it up.

With Whole Foods allegedly not being cooperative, Brown went to his attorney, who tried contacting the store’s corporate office. After three days of not getting a satisfactory response, Brown and his lawyer filed a lawsuit.

Whole Foods released this statement about the alleged slur:

Our team member wrote “Love Wins” at the top of the cake as requested by the guest, and that’s exactly how the cake was packaged and sold at the store. Our team members do not accept or design bakery orders that include language or images that are offensive. Whole Foods Market has a zero-tolerance policy for discrimination. We stand behind our bakery team member, who is part of the LGBTQ community, and the additional team members from the store, who confirmed the cake was decorated with only the message ‘Love Wins.’

Brown, who says he has dealt with years of discrimination in his life, did not specify any amount of money that he is seeking. He and his attorney say they want the person responsible for the slur to be punished, and for Whole Foods to make sure that this never happens again at any of their stores.