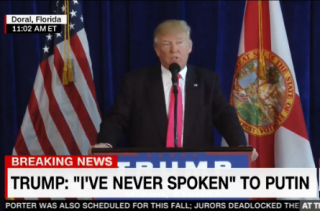 Since everything coming out of a Presidential candidate’s mouth is over-analyzed, and there doesn’t seem to ever be a time when Donald Trump isn’t talking, the media (myself included) never seems to run out of material during this election season.

So when Trump addressed the rumors of Russia being responsible for leaking incriminating Democratic National Committee emails by saying, “I hope you’re able to find the 30,000 emails that are missing,” regarding Hillary Clinton‘s deleted messages, everyone lost their minds.  He added, “I think you will probably be rewarded mightily by our press.”

People are going so far as to claim that Trump committed espionage with that remark. Clinton’s senior policy adviser, Jake Sullivan, even said, “This has to be the first time that a major presidential candidate has actively encouraged a foreign power to conduct espionage against his political opponent.”

If Russia or any other country or person has Hillary Clinton’s 33,000 illegally deleted emails, perhaps they should share them with the FBI!

The Espionage Act (U.S. Code §§ 792-799) refers to certain types of classified information that are “knowingly and wilfully communicate[d],” or the gathering or delivering of defense information “with intent or reason to believe that it is to be used to the injury of the United States or to the advantage of a foreign nation.” Trump certainly isn’t being suspected of gathering or delivering information. But is he asking Russia to commit espionage? He would have to know the content of Hillary Clinton‘s missing emails for that to be the case, and that content would have to be related to defense, codes, or communication intelligence. Trump would also have to believe that by Russia accessing the emails, it would harm the U.S. or benefit Russia.

All Trump said was that he hoped Russia could find emails that Hillary Clinton deleted from her private server. Common sense says that he only wants them to do that to potentially get Clinton in trouble, just like the DNC hack got Debbie Wasserman Schultz in trouble. Say what you will about Trump, he wasn’t looking to harm the U.S. or benefit Russia.

Oh, and let’s not forget that right before he said this, Trump said Russia probably wasn’t behind the hack in the first place.

Trump couldn’t even be found guilty of conspiracy to commit espionage or treason, because that would involve him working with another party, and all he did here was make a comment saying he hopes Russia finds the emails. There’s no evidence that Trump made an agreement with Russia, or that either he or Russia took any steps to finding the emails.

The most amusing part of all this is that the people who are accusing Trump of encouraging espionage are probably Clinton supporters. You know, the same supporters who believe she herself wasn’t guilty of espionage or even mishandling classified information.

Of course, you could argue that Trump is hoping that Clinton did delete that type of information, which is why he wants to find those emails. If Russia were to find such information, it could potentially benefit them or hurt the U.S. But Trump is so focused on getting Clinton in trouble, that he’s not thinking in those terms. One could say that Trump was “extremely careless” in asking Russia to get that sort of information. You know, just like FBI Director James Comey said Clinton was “extremely careless” with her email use. Ok maybe not a fair comparison but do Clinton supporters really want to go there? As a legal matter, the answer is no.